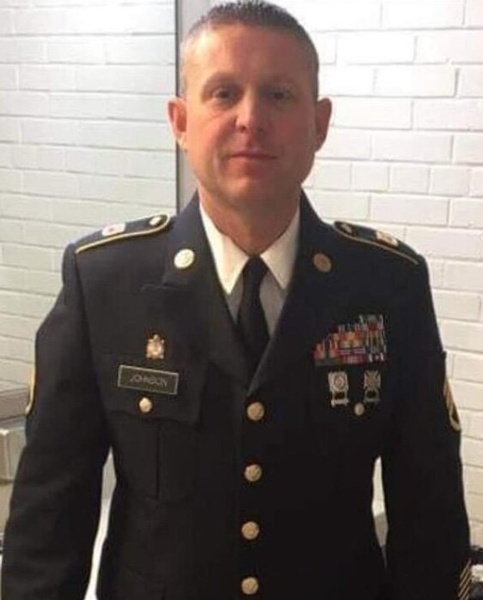 The funeral service for Jeremy Johnson will be live streamed on Hutchins Funeral Home Facebook page.

Jeremy Mark Johnson was born June 30, 1976 in Hastings, Nebraska to Darla (Reynolds) VanMatre and Mark Johnson. He attended school in Smith Center, Kansas and Gibbon, Nebraska where he graduated with the Class of 1995. He attended Hastings Community College and earned his Certificate in Mechanics.

Jeremy married Jasmine Gard on July 19, 1997 and to this union a beautiful daughter, McKayla Jean was born. Jeremy met Patty Sweet and fell head over heels in love. They were married on March 20, 2020 and made their home in Franklin, Nebraska. Patty’s daughters and children spent lots of time with Jeremy and he treated them as his own.

Jeremy loved family and friends and had a very big heart. He was especially proud of his daughter McKayla. They went everywhere together. He enjoyed doing all kinds of activities with all the children in the family. Patty and Jeremy enjoyed projects on their house and yard, which made him so proud. Jeremy loved working on the farm with his dad and doing projects for his mom. He especially enjoyed hunting with his brother-in-law TJ and his friend Pat, along with spending time with Kyle on his farm. He also loved to collect trucks, coke-a-cola and Nebraska memorabilia. He loved taking his nieces and nephews on adventures, playing jokes to make them feel special.

Jeremy joined the National Guard 995TH Maintanence Company, Smith Center, Kansas on July 22, 1999. He was called to active duty in 2009 and served in Kuwait for one and a half years. He retired in 2019 with full military honors.

Jeremy passed from this life Tuesday, August 10, 2021 at his home in Franklin. He will be forever remembered by his wife Patty, daughter McKayla, his mother Darla VanMatre (Frank) and father Mark Johnson (Carolyn); sister Rachelle Steckelberg (T.J.); Step sisters Holly Anway and Heather Smallcomb; step daughters Tiffany Odel, Brooke Reed and Faith Reed. Nieces and nephew Trishelle, Kennedy and Madden Steckelberg. He also is survived by his cousins, other relatives and many friends. He was preceded in death by his grandparents Lawrence & Dorothy Reynolds and Phillip & Kathryn Johnson; father-in-law LeRoy Sweet; and uncles Lyle Johnson, Gary Johnson and Dean Reynolds.

Funeral services will be Monday, August 16, 2021 at Hutchins Funeral Home with The Reverend David Hudson officiating. Cremation will follow the service and family inurnment will be in the Kirwin, Kansas Cemetery. Military Honors by the U.S. Army Honor Guard and the American Legion Post 209, Franklin, Nebraska.

To order memorial trees or send flowers to the family in memory of Jeremy Johnson, please visit our flower store.