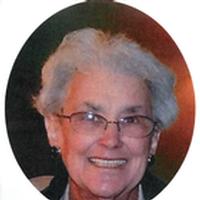 Jaynette Marie Keim, 68, passed into the Lord's loving arms on June 6, 2015 having fought a long battle with colon cancer. Memorial services for Jaynette will be Saturday, June 13, 2015, at 10:30 a.m. at the First United Methodist Church, in Franklin, Nebraska. There will be no visitation as cremation was chosen as she awaits Gary to be interred together at Maple Grove Cemetery in Bloomington, Nebraska.

She was born on Thanksgiving Day, November 28, 1946 in Kearney, Nebraska, to Jay and Marjorie (Wiles) Wright of Elm Creek, Nebraska. Jaynette grew up in Elm Creek attending the Elm Creek Public School graduating in 1964. She walked down that aisle with her future husband, Gary Keim. Upon graduating, she was hired by Claussen's Shoes in Kearney as a bookkeeper. Her employers were Ron and Carol Cope for whom a long friendship developed. She worked for them for 4 years until Gary swept her away to Omaha where he had started a career as a Nebraska State Trooper after getting out of the Army.

She then was employed by the main offices of Valmont Industries as a secretary to the Purchasing Agent for 5 years and stepped aside just before having her first child, Jason.

She stayed home taking care of the house, Gary, Jason and another child Brian until they both were in school.

She then worked at the Platteview School System until the family transferred to Kearney and lived in rural Elm Creek until Gary retired in 1995. During this time, she worked for Sapp Bros. at Odessa for 8 years as a bookkeeper and then on to Ruter's Hallmark in Kearney.

Following Gary's retirement, they purchased Gary's great-grandparents house in Bloomington, and refurbished it.

While doing this, Gary and Jaynette spent their summers at Rocky Mountain National Park as Rangers for 5 summers.

Jaynette is survived by her husband - Gary, a sister - Margaret Wright of Omaha, sons - Jason of Ord, Nebraska, Brian and his wife - Kelly of Rapid City, South Dakota, and five grandchildren. There are also many cousins and other relatives. She always enjoyed working with children including the Junior Ranger Program with NPS (National Park Service), the CHIPS (Child Identification program) of the Masonic Lodges and assisting Gary reactivating the American Legion Post No. 145 in Bloomington putting patches on shirts and making lunch following their monthly meetings. She was also a member of P.E.O. Chapter P in Bloomington. The Keim's church family included the Methodist Church in Franklin, the Community Bible Study Group at the Wesleyan Church in Naponee and the First Christian Church in Elm Creek where they were married some 47 years ago.

Pastor Roger Frederick officiated the service. Mrs. Deb James served as the organist, and the two songs were "On Eagles Wings" and "Unchained Melody." P.E.O. Chapter P had the service of remembrance at the end of the service.

To order memorial trees or send flowers to the family in memory of Jaynette Keim, please visit our flower store.