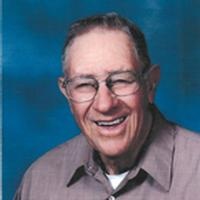 Jay R. Ziegler was born to John Ziegler and Lena (Muckel) Ziegler on November 9, 1930, at Hastings, Nebraska. He died July 18, 2016, at the Golden Living Center in Franklin, Nebraska.
Jay's early education was at Riverton Public School. After graduation, he attended Kearney State College and graduated from the University of Nebraska at Lincoln with a degree in Geology. He ran track at Kearney and UNL. He spent two years in the Army during the Korean War, stationed on the East Coast. After leaving the service he was employed as a geologist at 3M Company, St. Paul Minnesota, where he met and married Delores Klem. Three children were born to this union. Tired of traveling with his job, they moved to Riverton, Nebraska, in 1957, where Jay began to farm.
Jay was a life-time member of the Riverton Congregational (U.C.C.) Church, a member of the American Legion, and was on the Riverton Rural Fire District board. He greatly enjoyed serving on the Lower Republican NRD for 30 years.
Jay enjoyed family, friends, farming and working with cattle. He enjoyed living most of his life in Riverton.
Jay loved playing basketball, racquetball, softball, running in road races in various towns, canoeing in the Republican River races and with the Thompson Creek Whitewater men.
He coached the Riverton Little League baseball teams for 30 years, and Grade and Junior High boys basketball.
A favorite pastime was watching his children and grandchildren play sports in high school and college. He rarely missed a game, even when they were in other states. Lately, he began watching great-grandchildren play baseball and wrestling.
Jay loved to run and later to walk on the country roads.
They had some wonderful trips, but he always thought life was best in Riverton.
Preceding him in death were: his parents - Jack and Lena Zeigler; son-in-law - Charles Lorence; and grandson - Maury Lorence.
Left to mourn are his wife - Delores; son - John Scott Ziegler; daughters - Susan and husband Mark Tucker, and Sally Lorence; grandchildren - Robert Ziegler, Jennifer and Kasey Loschen, Jessica and Shannon Carraher, Mitchell and wife Katie Lorence, Mallory Lorence and Max Lorence; and fifteen great-grandchildren.

A celebration of life service will be (was) held at 10:00 a.m., Saturday, July 23, 2016 at the Crossgate Community Church, Franklin, Nebraska, with Pastor Kasey Loschen, Pastor Baron Cole, Pastor Nancy Cole, and Mr. Robert Ziegler officiating. Mr. Gabe Blowers will be (was) the pianist and the congregation will sing (sang) - "God Will Take Care of You," "It Is Well With My Soul," "Abide With Me," and " If Jesus goes With Me." Casket bearers were his grandsons - Robert Ziegler, Kasey Loschen, Shannon Carraher, Mitch Lorence, and Max Lorence. Interment will be (was) in the Riverton Cemetery, Riverton, Nebraska. The family suggests memorials to American Cancer Society, in care of the funeral home. Hutchins Funeral Home will be open Friday, July 22, 2016 from 9:00 am to 7:00 pm for visitation and to leave condolences. The family of Jay R. Ziegler will greet friends from 6:00 p.m. to 7:00 p.m., Friday evening. Online condolences can be left at www.hutchinsfh.com. Hutchins Funeral Home, Franklin, Nebraska, was in charge of service arrangements.

To order memorial trees or send flowers to the family in memory of Jay Ziegler, please visit our flower store.