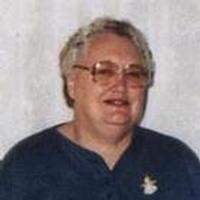 Jarldine Lantis, 71 years of age, of Franklin passed away Monday, October 17, 2011 at Golden Living Center in Franklin, Nebraska. She was born on May 5, 1940 in Webster County, Nebraska to Kenneth and Maxine (Jackson) Saathoff. Jarldine was a graduate of Riverton High School.

Jarldine married William Keith Lantis on July 25th, 1959 at the Webster County Courthouse to this union 5 children were born.

Memorial Services will be held at 2:00 PM Saturday, October 22, 2011 at the Hutchins Funeral Home, Franklin with Pastor Ivan Schoone officiating.

Inurnment will be in the Greenwood Cemetery, Franklin.

Cremation has taken place but a register book will be available to sign from 9AM to Noon, Wednesday through Friday at Hutchins Funeral Home. Memorials may be left to Family Choice.

Condolences may be left online at www.hutchinsfh.com.

Hutchins Funeral Home in Franklin in charge of arrangements.

To order memorial trees or send flowers to the family in memory of Jarldine Lantis, please visit our flower store.