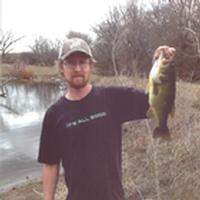 James Edward Holmberg, Jr. better known as J.J., was born to James and Lynda (Woodring) Homberg, on September 15, 1975. He passed away on November 14, 2016, at the Good Samaritan Hospital, in Kearney, Nebraska, with his family by his side, at the age of 41.
J.J. attended Riverton Public School thru the 8th grade and then he went to Franklin Public High School, where he graduated in 1994. He was very active in Wrestling, while in high school. In 1994, J.J. placed 5th at state wrestling and had many medals to show for his accomplishments. J.J. was baptized and attended Sunday school and was confirmed in the 7th Grade into the Riverton Congregational United Church of Christ.
J.J. began working in the construction/woodworking profession while still in high school. After high school he worked for Siel construction, and later owned his own business in Naponee, Nebraska, for several years. J.J. then went back to work in the construction/woodworking business and worked for various contractors in the Alma, Nebraska area. He also worked as a cook at the Station in Alma.
In 2015, he moved to Franklin where he lived at the time of his passing. J.J.'s favorite pastimes were spending time with the love of his life, his children. He loved taking them fishing and camping. J.J. also loved spending time with his many friends. If you were a friend of J.J.'s you had a very good friend! He was always willing to lend a helping hand and had a smile for you. He had the skill to take any Chevy and convert it into a HOT ROD. J.J. enjoyed music, and appreciated many different genres.
J.J. was preceded in death by a sister - Keela Rae, brother - Jody Allen, and his grandparents - Bernard and Neva Holmberg.
He is survived by his parents - James and Anita Holmberg, Franklin, Nebraska and Lynda and Phil Molzahn of Kensington, Kansas; his children - Jillian Lorraine, James Edward III, Alleigh Sage, and Jack Charles of Alma, Nebraska; brother - Jason and wife, Melanie Holmberg, Franklin, Nebraska; sister - Sheila and husband, Wade Johnson, and their children - Shelby, Ford, and Lincoln of Franklin, Nebraska; numerous step - brothers and step - sisters; grandparents - Marvin Woodring of Stockville, Nebraska, and Barbara Woodring of Curtis, Nebraska; as well as a host of other relatives and friends.

A celebration of life service for James Edward J.J. Holmberg, Jr. was at 2:00 p.m., Thursday, November 17, 2016, at the Riverton Cemetery, Riverton, Nebraska with Pastor Anthony Trevarton officiating. Casket bearers were: Joshua Minnick, Jeff Kleen, Troy Phifer, Roger Thrope, Tryson Peak, and D.J. Place. Interment followed in the Riverton Cemetery. Visitation was Wednesday, November 16, 2016, from 9:00 a.m. to 7:00 p.m. at the Hutchins Funeral Home, Franklin, Nebraska. The family suggests memorials for a marker for J.J. at the Cemetery or the children's education fund. On-line condolences can be left at www.hutchinsfh.com. Hutchins Funeral Home, Franklin, Nebraska, was in charge of arrangements.

To order memorial trees or send flowers to the family in memory of James Holmberg, Jr., please visit our flower store.