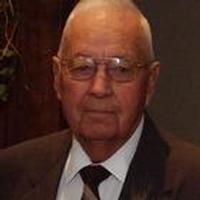 Jack Everett Siel of Franklin, Nebraska, was born September 28, 1924 to Everett and Mabel (Schmitz) Siel in Riverton, Nebraska. He passed away peacefully on Wednesday, September 3, 2014 at Franklin County Memorial Hospital at the age of 89 years, 11 months and 6 days. He had one younger sister, Laura.
He graduated from Riverton High School in 1941, and attended Kearney State College until enlisting into the Army Air Corps where he served from 1944-1946. During that time, he was stationed at an airbase in the Azore Islands off the coast of Portugal working as a cryptographer coding and decoding classified messages.
Jack was united in marriage to Velma Lipp on June 1, 1947 and was blessed with one daughter Nancy, and four sons Steve, John, Rich, and Todd.
Jack and Velma went on wheat harvest for two summers during the years of 1947 and 1948 from Oklahoma to North Dakota. After that they moved to the Lipp family farm east of Franklin and lived there until 1958. Jack moved to Franklin and was engaged in farming for the remainder of his life. In 1953, he formed a dirt contracting partnership with Jay Martin and later in 1954 joined with Don Adams and formed SAM Construction Company.
Jack loved baseball and played with the Riverton town team. He later coached Little League. He was a lifetime member of the Riverton American Legion and VFW of Franklin, and served on the Franklin County Veterans Committee for 60 years. He was also a member of the Franklin Masonic Lodge and the Shriners. Jack was baptized in the Riverton Congregational Church and was a member of the First Congregational UCC Church in Franklin. He also served on the church board and the Franklin school board.
Jack and Velma enjoyed several overseas trips to Europe, Scandinavia, Great Britain, and Russia. In Jack's later years he enjoyed watching his grandchildren participate in different activities.
Those who preceded him in death were his parents, sister, Laura Svoboda and her husband Martin, and daughter Nancy Steinkruger.
Survivors include his loving wife of 67 years Velma Siel; son-in-law Roger Steinkruger of Omaha; sons Steve and special friend Diana Hitesman; John and wife Jo; Rich and wife Margaret; Todd and wife Melinda all of Franklin. Grandchildren include Zach Siel and wife Brandi, Luke Siel and fiancé Emilee Dorn, Matt Steinkruger, Shane Siel, Roxanne Siel, Jake Siel, Kassie Siel, David Steinkruger, Josh Siel, and Brigitte Siel and one great grandson Austin Jack Siel.

A celebration of life service for Jack Everett Siel will be (was) Saturday, September 6, 2014, at 10:30 a.m., First Congregational United Church of Christ, Franklin, Nebraska, with Pastor Herman Keen officiating. Casket bearers will be (were): Zach Siel, Luke Siel, Matt Steinkruger, Shane Siel, Roxanne Siel, Jake Siel, Kassie Siel, David Steinkruger, Josh Siel, and Brigitte Siel. Interment will be (was) in the Greenwood Cemetery, Franklin, Nebraska, with Military Honors by Riverton American Legion. The family suggests memorials to: First United Congregational Church of Christ, Franklin County Memorial Hospital or the Franklin Baseball Fields and programs, all of Franklin, Nebraska. Visitation will be (was) Thursday, September 4. 2014, from 9:00 a.m. until 5:00 p.m., and Friday, September 5, 2014, from 9:00 a.m. until 8:00 p.m., with the family receiving friends from 6:30 p.m. until 8:00 p.m., at the funeral home. Hutchins Funeral Home, Franklin, Nebraska was in charge of service arrangements.

To order memorial trees or send flowers to the family in memory of Jack Siel, please visit our flower store.