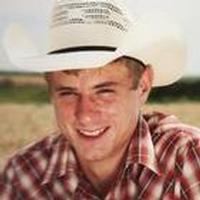 Hunter Todd Schnuerle, 19 years of age, of Bloomington, Nebraska passed away Saturday, June 22, 2013 from a motor vehicle accident near Naponee, Nebraska. He was born on March 15, 1994 in Kearney, Nebraska to Todd and Paula (Pichler) Schnuerle. He was baptized in May of 1994 at the Naponee Wesleyan Church.

Hunter graduated from Franklin High School in the Class of 2012. Wrestling was his favorite sport and he was also a state qualifier. He was a member of the Franklin FFA. Farming was his life and certainly loved to be outdoors. He loved his two younger brothers, Dillion and Tanner, and enjoyed them being by his side, playing tractors and working on motors. Many will remember him for his smile and always being a friend to everyone.

Hunter enjoyed planting and harvesting the crops and working with his dad - learning the ropes, following in his dad's footsteps from the time he was able to walk. Swathing and baling hay with his dad and brothers and working day and night showed his love to be busy on the farm. Some of his other enjoyments were welding, putting things back together, always looking for the trophy deer, coyote hunting with family and friends, being with his family and his mom's home cooked meals (except baked potatoes). In addition he enjoyed tubing down the Republican River with his friends, going to farm sales, and loved his Dodge and Ford vehicles, but couldn't wait to smash up his Chevy in the Demo. for family and friends to watch.

Hunter is survived by his parents, Todd and Paula Schnuerle and brothers Dillion and Tanner Schnuerle all of Bloomington, NE; grandparents, Barry and Jeanette Pichler of Republican City, NE and Neil and Shirley Schnuerle of Bloomington; uncle, Barry Pichler and wife Shaun; cousins, Jesse and Sarah Pichler, all of Columbus Montana; and a host of other relatives and friends. .

Graveside services were held at 10:30 am Thursday, June 27, 2013 in the Naponee Cemetery in Naponee, with Pastor Herman L. Keen officiating. Music was "Who You'd Be Today" by Kenny Chesney, "We Rode In Trucks", by Luke Bryan, and "God Made A Farmer" by Paul Harvey. Casket bearers were - Klinton Dennis, Kade Dennis, Kale Schmidt, Koltin Dennis, Dakota Foreman, Brandon "Bama" Breidenbach, Tony Garvin, Justin Abbott, Tyler Rose, Taylor Badger, Michael Georege, and Nathan Wentworth. Honorary casket bearers were - Franklin High School "Class of 2012." Visitation was held from 9:00 am to 8:00 pm Wednesday, June 26, 2013 in the Hutchins Funeral Home in Franklin. Memorials have been established to the Franklin FFA. Condolences may be left online at www.hutchinsfh.com. Hutchins Funeral Home was in charge of arrangements.

To order memorial trees or send flowers to the family in memory of Hunter Schnuerle, please visit our flower store.