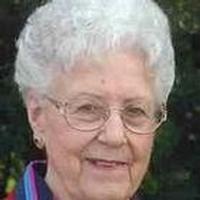 Guila Yvonne Jones of Franklin, NE, went to live with her Lord and Savior on Monday, December 8, 2014 at the Golden Living Center in Franklin, NE. She was born nine miles north of Kensington, KS, on May 19, 1920 to Mart and Ethel Lovell. She graduated from Orleans High School in Orleans, NE.
On August 5, 1940 Guila was united in marriage to William H. Bose, and together they had 2 children, Sondra and Larry. She loved being a mother and would often say that she had the two best kids that anyone could ask for.
Guila was no stranger to hard work and enjoyed working with people and in service. She was a familiar face to businesses in Franklin working at Brad's Supper Club, Sindt's Clothing and the Frosty Mug Drive Inn. Guila's favorite place to work had to be with helping her son, Larry at the Dug Out in Franklin. Guila truly enjoyed working with the high school girls and spending time with the community.
In August of 1971 Guila married Harry Jones. Harry and Guila worked together farming and in the Used machinery business. In October of 1975 Harry was tragically killed in a tractor accident. Guila continued the used machinery business and later partnered with Bob Struckoff to form J&S Used Machinery. Guila was a strong business woman who could close a deal as well as any man, if not better.
It was at the young age of 19 in 1939 that Guila accepted Jesus into her heart and was baptized. Guila was a member of the Athol United Christian Church in Athol, KS for over 30 years. She taught Sunday school and Vacation Bible School for many years and had a true joy teaching children about Jesus. Guila transferred her membership in 2010 to the Franklin Missionary Church in Franklin, NE.
Guila served as a member of the American Legion Auxiliary for over 25 years. She loved to volunteer, and was on many committee projects. Guila volunteered many hours to the Athol Co-op Dinners.
On July 30, 1982 Guila married Lloyd Conaway, known to all the grandkids as Pops Lloyd. They enjoyed a joyful life together. As a retired couple they made it a mission to make every day count and do what they love - spending time together and travelling. They made frequent trips to Colorado fishing accompanied by Grandson David, to Las Vegas to play a few slots, and to many of the grandchildren's activities. Lloyd brought Guila many years of happiness and was a great stepfather and Pops to her children and grandchildren. After Lloyd passed away in 1997, Guila moved to Franklin, NE to be closer to her children. She enjoyed living in Franklin. In 2013 Guila moved to Assisted Living in Franklin and made her new home surrounded by "old" friends. After falling and becoming ill Guila was transferred to the Golden Living Center Nursing Home where she would take her last breath.
Many people have described Guila as a wonderful and classy lady. She was always impeccably dressed, with her hair done, and of course earrings and lipstick on. A caring soul, Guila was eager to help people anyway she could and enjoyed spending time and talking to her friends and family on the phone. Guila was known far and wide for the making and donating her potato salad for funeral luncheons and for family meals.
She will be truly missed. We will always remember she "loved us a bushel and a peck and a hug around the neck"
Guila is survived by her children, Sondra Cole of Franklin and Larry (Debra) Bose of Lincoln. Grandchildren, Lisa Worley of Grand Island, David Cole of Franklin, Lori Clark of Franklin, Carrie Bose of Omaha, Katie (Kevin) Rohe of Manning, Iowa, and Kasey Bose and fiancé Michael Briones of Lincoln. Great grandchildren, Tiffany Cole, Madison Drame, Emily Eckley, Kinsey Clark, Chesney Charles and Kylie Rohe. Guila was preceded in death by her husband, Harry Jones and Lloyd Conaway, Brother Elwood and sister-in-law Stella Lovell, niece Rita Daniels, and son-in-law Lavern Cole.
A Funeral service organized by Hutchins Funeral Home of Franklin, NE will be held at Cross Gate Community Church in Franklin, NE on December 12, 2014 at 10:30 AM with burial at the Greenwood Cemetery, Franklin, NE. Visitation will be Wednesday from 3:00 PM to 8:00 PM and Thursday 9:00 AM to 8:00 PM at Hutchins Funeral Home. Memorial donations may be made in Guila's name to the Franklin Public Library, Franklin EMTs, and the CrossGate Community Church in Franklin.

To order memorial trees or send flowers to the family in memory of Guila Jones, please visit our flower store.