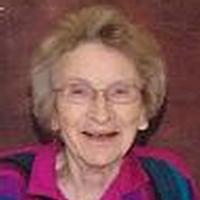 Gloria Darlene Jacob died on November 11, 2015 at her residence in Minden, Nebraska surrounded by family, following a courageous battle with age.

She was born on March 17, 1930 to Granvile and Ida Lue Saffer at Emporia, KS. She grew up there and was united in marriage to Arthur Dale Jacob on June 9, 1950. The couple left Emporia around 1950, moving to Denver. In Denver two children blessed this marriage, Dalene and Johnny. In 1969 the family moved to Franklin, Nebraska where she resided until her passing.

Darlene had many various jobs in her lifetime. She loved a job where she could be involved with people or livestock. In her later years if she could catch you, you were going fishing. One of her many joys in life was working with the children in church. If it was fixing snacks to building something for the programs, she was the gal to get it done. She was a people person, helping others and spending time with her family was the twinkle in her eye.

She was preceded in death by her parents and their immediate family, and by her husband.

Funeral services will be held on Saturday, November 14, 2015, 10:30 am at the Evangelical Free Church -Franklin, Nebraska, with Pastor Jim Hossler, officiating.

Memorials are suggested to the kids club of her church.

Hutchins Funeral Home, Franklin, NE was in charge of arrangements. Online condolences can be given at www.hutchinsfh.com.

To order memorial trees or send flowers to the family in memory of Gloria Jacob, please visit our flower store.