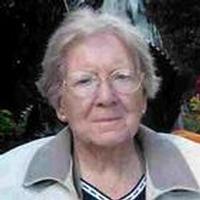 Gloria graduated from McCook High School in 1944 and attended McCook Community College for one year. She married Owen Dack, a pilot in the U.S. Air Force. They made their home in Texas. Owen was killed in a training exercise.

Gloria moved to Denver and worked for United Airlines. Later, Gloria moved to Boise, Idaho. She married Mel Jennings who was killed in a single car accident about three months after their wedding.

She moved to Tacoma, Washington. She moved back to McCook to care for her ailing father. She was hired as the secretary for the land acquisition officer for the Bureau of Reclamation during the preparation of the building of the Norton Dam. On September 23, 1961,

Gloria married Charles Harrison in McCook. They made their home in and near Naponee. Two sons blessed this marriage, infant Frank Samuel in 1962 and adopted son Matt in 1964. Gloria cherished everything she did with her son Matt.

Gloria also enjoyed reading, working crossword puzzles, playing cards and entertaining dinner guests. She made numerous meals for hired farm hands. She sang in the Sweet Adeline's, was a member of a Home Extension Club, and played on several bowling teams at the Alma Lanes. In 2002 Gloria moved to Franklin. In 2010 she moved to the Good Samaritan Villa in Alma.

Gloria was predeceased by her parents, infant son, husband, Charles in 1994, and sister, Claire Brooks in 2007. She leaves to mourn her son, Matt and wife Lisa, and granddaughter, Claire, of Naponee, and a host of friends.

A celebration of life service for Gloria May Harrison, was held Saturday, January 5, 2013,at 10:00 a.m. at the United Methodist Church, Franklin, Nebraska, with Pastors Nancy Leonard, and Scott Randall officiating. Organist was Mrs. Connie Schmidt, who played for the congregational hymns "Hymn of Promise" and "Angles We Have Heard on High". Matt Harrison served as the urn bearer to the Naponee Cemetery, Naponee, Nebraska. The family will make a determination about memorial donations at a later date. Hutchins Funeral Home, Franklin, Nebraska was in charge of arrangements.

To order memorial trees or send flowers to the family in memory of Gloria Harrison, please visit our flower store.