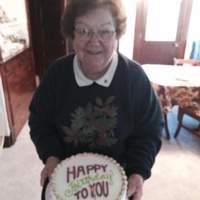 Gladys Laurel (White) Kugler of Franklin, Nebraska, was born October 31, 1931, on my father’s homestead, 15 miles north of Walsenburg, Colorado, in Huerfano County, to Roy and Madge (Reams) White. I was the 5th of 9 children.

When I was 5 years old, our family moved from the homestead to a home on Turkey Ridge. I attended Turkey Ridge School for 8 years. I was set to graduate from Turkey Ridge School on May 15. However, my brother Dan was killed in World War II. The family received notice of his death on the first of May, and because of this, I was not able to attend my 8th grade graduation. In those days, you did not go out in public when there was a death in the family.

The next fall, I began Huerfano County High School. During the Christmas of my freshman year, Huerfano County had a big blizzard. The family could not get out and I could not get to Walsenburg to go to school. So the following year, I had to start high school again as a freshman. The next Christmas, our family moved to Riverton, Nebraska. I graduated with the class of 1950 from Riverton School. I was the only one of nine children to graduate from high school.

The summer following my graduation, I began working at Naden’s Pharmacy in Franklin. There I met Elton Kugler. We were united in marriage, January 15, 1953, in Macon, Nebraska.

This union was blessed with three wonderful children, Lyn LeRoy, Connie Jean and Dean Alfred. Elton owned and operated the Ford Tractor business in Franklin for many years until his health began to fail, and when my father passed away, his farm came up for sale. Elton and I bought the farm and moved a house onto it, as the farmhouse was gone.

I loved it out on the farm on Thompson Creek, where we lived for 24 years. Then, Elton and I sold the farm to our son, Lyn, and in 1996, moved back to Franklin. Elton passed away in November, 1998.

I worked at the Franklin Hospital when my children were young. After moving to the farm, I worked at Gala Gardens in Inavale, Nebraska, and Grandview Manor in Campbell, Nebraska. After Elton’s death, I worked at the Senior Center in Franklin.

I was a Goldstar Sister of the American Legion and also the VFW, and a life-long member of the Franklin County Historical Society. I was a member of the Rebekah Lodge for over 5 years. That is where I met my friend and companion, Irvin Gettys.

I was preceded in death by my husband Elton Kugler; my father and mother; 3 brothers; 3 sisters; and one daughter-in-law, Joyce Kugler.

To order memorial trees or send flowers to the family in memory of Gladys Kugler, please visit our flower store.