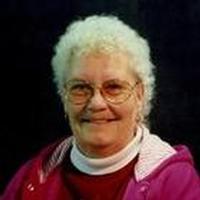 Geraldene Loschen, the daughter of Ralph and Mildred (Rathjen) Detlefsen, was born on November 23, 1931 in Red Cloud, Nebraska. She passed away on November 23, 2011 at Bethany Home in Minden, Nebraska at the age of 80 years.

Geraldene married Dean Loschen on May 17th, 1953 at the Congregational United Church of Christ in Franklin, Nebraska. To this marriage three sons were born.

She graduated from Franklin High School in 1949 and Kearney State College in 1981 earning a Bachelors Degree.

After normal training Geraldene taught in area rural schools from 1949 to 1956. After she graduated from Kearney State College she returned to teach in Riverton from 1981 to 1992. She retired in 1992 but continued to substitute when needed for many years.

Besides enjoying and loving her granddaughters, Geraldene loved to knit and crochet objects for family and friends. She enjoyed drinking coffee and visiting with her friends. She was very passionate about her flowers and plants.

Geraldene was a faithful member the Franklin Congregational United Church of Christ for 53 years.

She was proceeded in death by her parents and brothers Gary and Les Detlefsen.

Funeral services: Monday, November 28, 2011 at 11:00 am from the Franklin Congregational United Church of Christ in Franklin, Nebraska with Pastor Herman Keen and Pastor Nancy Cole officiating.

Memorials are suggested to the Riverton or Franklin Congregational United Church of Christ.

Hutchins Funeral Home of Franklin, Nebraska in charge of the arrangements.

To order memorial trees or send flowers to the family in memory of Geraldene Loschen, please visit our flower store.