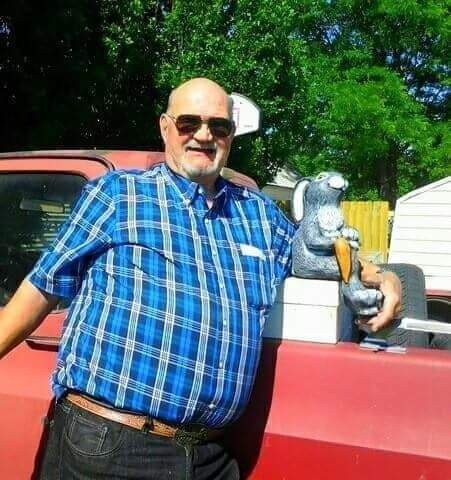 Gerald was born June 1, 1948 in Minden, Nebraska, the first child of Phil and Val Jean Webber. He passed away at his home Tuesday, February 1, 2022 in Colby, Kansas at the age of 73. He grew up and graduated in Riverton, Nebraska with the Class of 1966. Gerald joined the Navy in 1967 where he served in Vietnam. While in the service he received letters from a young lady from Naponee, Nebraska. He fell in love. Gerald and Wanetta Jackson got married April 18, 1969. To this union eight children were born. Gerald worked multiple jobs and owned several businesses. He started at the Franklin County Sentinel, then was an outside maintenance man and bus driver for the school, he owned and operated a trash service, and worked for Franklin Motor Company. He always loved being involved in the community. He volunteered at the Fire Departments and joined the EMS. Gerald served in the National Guard 170th Maint. Unit. He also took on a “side job” building race cars. He had a friend who had a vehicle and he had an engine so he built a race car and drove it in a race. Unfortunately, his racing career never took him to NASCAR. He moved his family to Wilcox, Nebraska and worked as a janitor. The family moved to Gaylord, Kansas and he worked at the local school, was a city man and owned/operated a bar. Gaylord is a small town, population approximately 180 people where Gerald was a member of the FBI (Fat Boys Incorporated) along with Patrick Conrad and Robert Lark. This group was meant to help the citizens of Gaylord, earning them the first president’s award on Labor Day. Gerald moved his family to Kanorado, Kansas and while there, he was called to serve in the Desert Storm conflict in Iraq. In Kanorado he worked as a detention officer, city man, and with the EMS. At the time of his death, he was living in Colby, Kansas where he loved going to the B-hive along with spending time with his family. Gerald worked full time at the local Wal-Mart until he was called home. He was a husband, father, and grandpa. We say that Gerald has never met a stranger because when he met someone, he cared for the other and used the moment to build a relationship. We could count on him to be there when needed no matter the distance. He enjoyed going to every activity his grandchildren were in, taking road trips with fun “shortcuts” along the way, making sure he got his piece of cake out of the middle, and has made generations of the classic windmill game. He never really worked a day in his life because he always enjoyed everything he has done with his whole heart. He was preceded in death by his parents Phil and Val Jean, father-in-law Wayne Jackson, son Phillip Webber, infant son Gerald Webber, Jr., grandson Nathan Grabast, granddaughter Shanelle Padilla, nephews Jon Webber and Toby Spaulding, brother-in-law Val Reed, sister-in-law Elaine Jackson. Gerald is survived by his wife Wanetta Webber; six children: Vera Alewine, Jeannette Rust, Geri (Tom) Brown, Linda (Derek) Morse, Dawn Webber, Patrick (Charity) Webber; brother Don (Kathy) Webber; sisters Ellen (Gary) Davis and Joyce Weed; ten grandchildren; numerous nieces and nephews.

To order memorial trees or send flowers to the family in memory of Gerald Webber (Jerry), please visit our flower store.