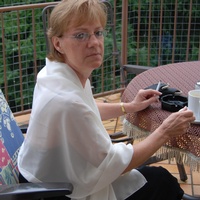 Gail Maxine (Carman) Hall was born October 27, 1953 at Wichita, Kansas, to Ronald and Deverda (Shephard) Carman. She died December 6, 2018 at the Good Samaritan Hospital, Kearney, Nebraska, at the age of 65 years, 1 month and 9 days.

Gail was married early in life, to this union one son was born, Larry Wayne. They moved over the next few years to several military bases, as her husband’s duty stations changed. After a divorce, Gail and Larry moved to Central City to be close to family. She later moved to North Platte, and worked as a CNA, until a back injury made the job impossible, and a long recovery to be well again. That is when they moved to Paris, Texas to attend jewelry school. She returned to Nebraska, and worked as a jeweler for Olson’s Jewelry, in Hastings, Nebraska. She met Curtis Hall. They were united in marriage on June 26, 1992, at Hastings. They made their home in Campbell, Nebraska. Gail returned to work at the Campbell Nursing Home in the laundry and later as a medical aid. She always had a soft spot in her heart for young children and the elderly.

Her grand kids were never real close so she adopted neighborhood children as her own grandchildren, and they would call her Aunt Gail and Curtis, Uncle Curt. She loved to dance, and garden, but a bad back did not allow her to do as much as she would have liked. Gail was an amazing cook and taught Larry how to cook and bake, and destroy a clean kitchen while creating huge dinner rolls, pies, egg noodles, and cinnamon rolls.

A memorial celebration of life for Gail Hall will be held on Saturday, December 15, 2018, at the First United Methodist Church, Franklin, Nebraska, with Pastor Phil Sloat officiating. Music for the service was: “I Won’t Let Go” by Rascal Flatts; “Jesus Take the Wheel” and “See You Again” by Carrie Underwood, and “In the Garden”. Inurnment will be in the Greenwood Cemetery, prior to the service. The family would like to ask if anyone would like to honor Gail’s memory, they suggest memorials to American Heart Association, Cancer Institute, Franklin County Historical Society, or the donor’s choice. Friends may stop at the Hutchins Funeral Home, Franklin, Nebraska, on Thursday, December 13 and Friday, December 14, 2018, from 9:00 a.m. to 12:00 noon to sign the register book. Online condolences can be left at www.hutchinsfh.com. Hutchins Funeral Home, 1402 M Street, Franklin, Nebraska 68939, was in charge of arrangements.

To order memorial trees or send flowers to the family in memory of Gail Hall, please visit our flower store.