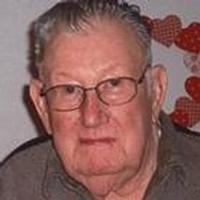 Frank David Sanger, son of David and Hannah Jelken Sanger was born February 9, 1922 at their family farm home northeast of Franklin, NE. He passed away from this life on Friday, November 6, 2009 at Franklin County Memorial Hospital, Franklin, NE. Frank attended school at District #34. He was baptized and confirmed in the Macon Zion Lutheran Church and remained a member there all his life. On May 28, 1944 Frank was united in marriage to Ethel Trambly in Franklin, NE. They made their home northeast of Franklin. They lived there until they moved to Franklin in May 1988. To this union 3 children were born, Warren, Alan, and Debra. Frank loved the farm and the outdoors. He was an avid hunter and fisherman. He served on School Board, Township Board, Zion Lutheran Church Board, and served as a Franklin County Supervisor for 10 years. Frank loved people and was a friend to all. His children, grandchildren and great grandchild were very special to him.

Funeral services will be at 10:30 AM, Monday, November 9, 2009 at Macon Zion Lutheran Church, Macon, Nebraska with Rev. Baron Cole officiating. Visitation will be from 1PM to 8PM Sunday at Hutchins Funeral Home. Burial will be in Greenwood Cemetery.

In lieu of flowers the family suggests memorials to the Frank Sanger Memorial Fund.

To order memorial trees or send flowers to the family in memory of Frank Sanger, please visit our flower store.