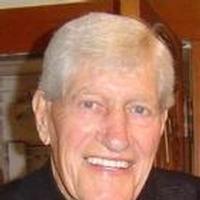 Frank Mensor, known to everyone as “Swede,” transitioned this life on Tuesday evening, March 25, 2014. Swede was 94 years old.

As the name implies, Swede’s ancestors came to America from Sweden, and Swede grew up in Forsyth, Montana, where he excelled in sports of all kinds, especially football and basketball. He was particularly close to the Blackfoot Indian tribe and earned their friendship and respect through his sportsmanship and talent. Swede was mostly raised by his maternal grandfather, D. J. Muri, from whom he learned the value of a hard days work, honesty and dependability.

When World War II came around, Swede served his country by joining the Air Force and achieved the rank of Master Sergeant in the Military Police. Because of his football prowess, he became a legend playing in a special league formed by the Air Force for entertainment and boosting morale during the war. He traveled all over the United States playing against future big name football professionals and was known for his hard hitting, aggressive running and his ability to take a lick. You could tell by his nose.

After the war, Swede eventually moved to Colorado Springs, Colorado and married Melba June Tucker. He worked in the beer distribution business for Coors Brewing Company. A more perfect job could never have been found, with Swede’s love of people, his storytelling and his engaging personality. He had that easy laugh and that special twinkle of the eye when he smiled and teased. Later on, Swede worked for Northern Van Lines and with his wife’s twin brother, Melvin J. (Mel) Tucker, owned and raced thoroughbred horses at race tracks around the country. Eventually moving to Franklin, Nebraska, Swede and Melba June owned and managed The Back Stretch (also known as Swede’s or The Hill), a combination motel and grocery with a very popular bar and restaurant. After selling The Back Stretch, Swede went to work at the Franklin Senior Center retiring in 2005 at the age of 86. He loved his job and truly enjoyed helping people.

Swede did not wish to have any formal services. A private family gathering will be held for inurnment at Greenwood Cemetery in Franklin, Nebraska. Memorials in the name of Frank “Swede” Mensor may be made to the Franklin Senior Center or to any preferred charity.

To order memorial trees or send flowers to the family in memory of Frank Mensor, please visit our flower store.