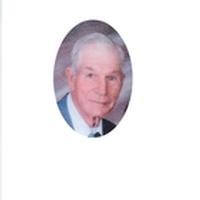 Frank John “Frankie” Jelken was born on May 16, 1922, and went to his heavenly home on April 21, 2015, at the age of 92 years, 11 months, and 5 days. The eldest of 4 children, Frank was born on the family farm 2 miles south and 1 mile west of Macon, Nebraska, to John Frank and Marie Elisa (Johnson) Jelken. He was baptized as an infant and confirmed in March of 1937, at the Zion Lutheran Church west of Macon. Frank attended District 67, which was ¾ mile east of his home. He took 7th and 8th grade at the same time as he was needed on the farm, so his formal education ceased. Frank joined the Merchant Marines in 1944, and worked for 2 years as a machinist on board a tanker delivering fuel to the troops. Later he joined the United States Army for a short time.

Frank met Norma Jean Dallmann at the dime store in Franklin, and they were later married on October 24, 1948. They built their home 4 miles north of Franklin and lived there until 2011. They celebrated 66 years of marriage and were blessed with 4 children.

Frank loved the farm and working with his cattle. He was always busy inventing or making something. He and his family vacationed many places in campers built with his own hands and their vacations always included fishing. Later he took up fixing fishing rods and reels as a hobby.

A celebration of life service for Frank John Jelken will be (was) Friday, April 24, 2015, at 2:00 p.m., at the First United Methodist Church, Franklin, Nebraska, with Pastor Roger Frederick and Mr. Glenn Frecks officiating. Mrs. Connie Schmidt will be (was) the organist, and the congregation will sing (sang): “Amazing Grace,” “In the Garden,” and “Abide with Me.” Casket bearers will be: Bryan Jelken, Benjamin Jelken, Grant Schmidt, Jason Haussermann, Richard Herrick, and Mike Ingram. Honorary Casket bearers will be (were): Jami Schmidt, Kim Haussermann, Jenna Vettel, Tyler Vettel, Kristen Schmit, Austin Edwards, Deanna Slawnyk, Mark Slawnyk, Megan Jelken, and Jay Staehr. Interment will follow the service at the Greenwood Cemetery, Franklin, Nebraska. The family suggests memorials to: First United Methodist Church, Franklin. Visitation will be (was) Thursday, April 23, 2015, from 1:00 p.m. to 7:00 p.m. with the family present from 6:00 p.m. to 7:00 p.m. at the Hutchins Funeral Home, 1402 M. Street, Franklin, Nebraska. Online condolences may be left at www.hutchinsfh.com.

To order memorial trees or send flowers to the family in memory of Frank Jelken, please visit our flower store.