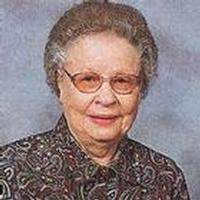 Florence N. Rust, 85, entered into eternal rest with her Creator October 13, 2012 at Long Term Care in Smith Center, Kansas.
Florence was born on February 6, 1927 at the George Baetz farm in Smith County, Kansas. She was the daughter of George and Grace ( Lewis ) Baetz.

In 1952 Albert and Florence purchased the Harry Haskin's farm in Smith County, Kansas and moved there with their family. They lived on the farm and raised their children there until they retired in 1992 and moved to a home in Franklin, Nebraska. Florence and Albert celebrated their 50th anniversary in May of 1997.

Florence loved to cook, garden, embroider, read and quilt. She loved flowers and always had a beautiful yard. Florence was a member of the Reamsville United Methodist Church, and after retiring from the farm, the Franklin United Methodist Church. She was also a member of the Rebekah Lodge in Franklin, Nebraska.
She was preceded in death by her parents, her husband Albert, their daughter, Karen, a sister, three brothers, two brothers-in-law.

Memorials are suggested to Hospice Services of Phillipsburg, Kansas.

To order memorial trees or send flowers to the family in memory of Florence Rust, please visit our flower store.