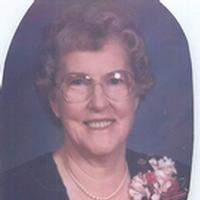 Fern Louise Smith was born December 6, 1922, in Red Cloud, Nebraska, to Ransom and Viola (Gouldie) Smith. When Fern was in the 4th grade the family moved to Naponee, and in 1940, she graduated from high school there. Following graduation she worked for 50 cents a day doing domestic work, gardening, butter churning, and childcare. Later she worked for 7 cents an hour as a switchboard operator in
Naponee. She was at the switchboard on December 7, 1941, when the Pearl Harbor news came over the wire.

On April 17, 1941, Fern married Wayne Quincy of Upland Nebraska. Their plans to do rental farming were interrupted when Wayne was drafted into the army. Three children were born to this marriage, Virginia, Wayne Jr., and Edward. Wayne was stricken with polio in 1948, and after 16 months in an iron lung at the Lincoln Veteran's Hospital, he died at the age of 30. Fern's strength of character and commitment to her children carried her through this difficult time.

On July 22, 1950, Fern was united in marriage to Martin Schegg of Bloomington, Nebraska, whom she had met at the veteran's hospital. The family moved to Martin's farmhouse near Bloomington. To this union a son, John, was born.

Fern enjoyed her role as homemaker and mother and was involved in the Bloomington Methodist Church and the American Legion Auxiliary, becoming a 50 year gold star member. She was an excellent seamstress and masterful in the arts of crocheting, knitting and quilting. Many of her afghans were donated to her church to be auctioned at the holiday bazaars. Fern's children and grandchildren treasure the beautifully created quilts and afghans that she gifted to them. The grandchildren and great-grandchildren cherish their "BoBo" sock monkeys that she made.

Fern had a long-time desire to become a nurse, and at the age of 50 with the encouragement of Martin, she enrolled in the Central Nebraska Technical College School of Practical Nursing and earned her Licensed Practical Nurse Degree in 1972.

She loved her nursing career and worked for nearly twenty years in long term care.

Fern died November 1, 2016, at the Franklin Rehabilitation and Care Center in Franklin, Nebraska, at the age of 93 years.

A celebration of life service for Fern Schegg will be held on Saturday, November 5, 2016,at 10:30 a.m. at the First United Methodist Church, Franklin, Nebraska, with Pastor Loren Hatlin officiating. Interment will be at the Maple Grove Cemetery, Bloomington, Nebraska, between her husbands. Memorials may be given to the Franklin Methodist Church or to a charity of the donor's choice. Visitation will be Friday, November 4, 2016, at the Hutchins Funeral Home, 1402 M. Street, Franklin, Nebraska 68939, from 9:00 a.m. to 7:00 p.m. Online condolences can be left at www.hutchinsfh.com. Hutchins Funeral Home, Franklin, Nebraska, was in charge of service arrangements.

To order memorial trees or send flowers to the family in memory of Fern Schegg, please visit our flower store.