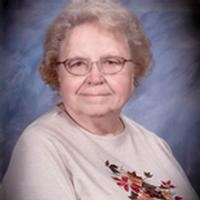 On October 21, 1946, she married Leonard D Anderson in Phillipsburg, Kansas. To this union one son was born, Virgil H Anderson. Fern and husband Leonard were baptized as adults on the same day as their son Virgil at Our Redeemer Lutheran Church in the Ash Grove community. They lived on a farm in Ash Grove community where they retired.

Fern and Leonard also cared for their nephews and niece, Dennis Schriner, Sharon (Schriner) Johnson, and Maynard Schriner when their father, Fern's brother, Cecil Schriner, died of a heart attack in October, 1955.

Fern was a member of the Ladies Aide of Our Redeemer Lutheran Church and Good Neighbors Extension Club in northern Franklin County. Fern was active at the Senior Center in Franklin, Nebraska. In April, 2013 she moved to Homestead Homes in Kearney, Nebraska.

Survivors include daughter-in-law Marilyn Anderson of Kearney, Maynard and wife Charlene of Hildreth, 11 grandchildren and 23 great-grandchildren.

A celebration of life service for Fern E. Anderson will be (was) Monday, March 2, 2015, at 11:00 am, at the Trinity Lutheran Church, Hildreth, Nebraska, with Pastors Patti and Steve Byrne officiating. Music will be with Mrs. Mary Bunger organist and Ms. Melinda Ferree, singing acappella, "The Old Rugged Cross." Casket bearers will be: Maynard Schriner, Jr., Cecil Schriner, Mike Anderson, Virgil Anderson, Jerry Johnson, and Beau Johnson. Honorary casket bearers will be (were) Dale Schriner, Daren Schriner, Daniel Schriner, Kim Anderson, and Jennifer Ortgiesen. Interment will be (was) at 2:00 p.m., Monday, at the Greenwood Cemetery, Franklin, Nebraska. Visitation will be (was) Sunday, March 1, 2015 from 1:00 pm to 7:00 pm with the family receiving friends from 5:00 pm to 7:00 pm at the Hutchins Funeral Home, 1402 M. Street, Franklin, Nebraska.

The family suggests memorials to the Trinity Lutheran Church or Franklin Senior Citizen Center. Hutchins Funeral Home was in charge of arrangements.

To order memorial trees or send flowers to the family in memory of Fern Anderson, please visit our flower store.