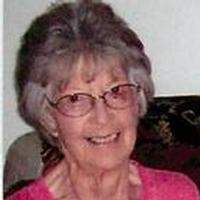 Evelyn (Ramsay) Maska was born on July 11, 1921, near Bloomington, Nebraska to William and Rebecca (Heaton) Ramsay. At the age of 12, Evelyn entered Franklin High School and boarded with residents of Franklin. She graduated at the age of 15. When Evelyn was 16 years old, she began her teaching career of 12 years in various rural school districts in the Franklin, Nebraska area.
Evelyn married Wayne LeRoy Maska, on March 31, 1946, at the Franklin United Methodist Church, Franklin, Nebraska. She continues teaching and later became a full-time farm wife and mother on the family farm northeast of Franklin.

Evelyn enjoyed her neighbors, cooking, and baking. She participated in the Hillside Extension Club, and church activities. Evelyn was a long-time member of the United Methodist Church. Flowers, dancing, playing cards with friends, reading, being with her family, and playing with her grandchildren gave Evelyn Joy. She was an enthusiastic supporter of Husker Nation, cheering the teams on with her Franklin girlfriends.

She was preceded in death by her parents; her husband Wayne on August 4, 2011; sister Jean Sjogren; and a brother Bill Ramsay. She will be missed by her two daughters - Vickie and husband Bob Hoeft of Lee's Summit, Missouri, and Connie and husband Stuart Yoder of Omaha, Nebraska; four grandchildren - Chadd and wife Suzi Hoeft, Anne Hoeft, Loren Yoder and Lee Yoder; two great- grandchildren - Drew and Campbelll Hoeft; sister Margaret Cordle of Hastings, Nebraska; sister-in-law Kathryn Maska of Franklin, Nebraska; and a host of other relatives and friends.

Galatians 5: 22-23 But when the Holy Spirit controls our lives he will produce this kind of fruit in us: love, joy, peace, patience, kindness, goodness, faithfulness, gentleness and self-control...........

A celebration of life service for Evelyn Maska will be (was) Tuesday, May 13, 2014, at 10:30 a.m., at the United Methodist Church, Franklin, Nebraska, with Pastor Stuart Yoder officiating. Mrs. Connie Kahrs will be (was) the pianist. Casket bearers will be (were) : Warren Sanger, Alan Sanger, Rodney Steinkruger, Danny Olson, James Olson, and Bill Ramsay. Interment was in the Greenwood Cemetery, Franklin, Nebraska beside her husband, Wayne. The family request memorials be given to the charity of their choice. Online condolences may be left at www.hutchinsfh.com. Hutchins Funeral Home, 1402 M Street, Franklin, Nebraska 68939, was in charge of arrangements.

To order memorial trees or send flowers to the family in memory of Evelyn Maska, please visit our flower store.