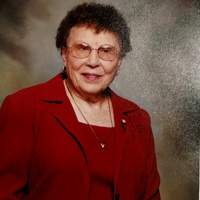 Evelyn Marie (Custer) Dallmann Kesler was born on October 22, 1927, at home near Upland, Nebraska, the 1st child of Louie and Clara (Bartels) Custer. She departed this life on April 20, 2019, at the Mary Lanning Hospital, Hastings, Nebraska, at the age of 91.

Her growing up years were spent helping her parents with a dairy, her Dad outside with the farm work and her mother caring for her younger siblings. She loved school and started at an earlier than normal age, graduating from Upland High School in 1944 at the age of 16. On June 20, 1944, she married Edward Henry Dallmann at the parsonage in Macon, Nebraska, and settled into rural life on the Macon Prairie. To this union three daughters were born – Jolean, Verdell, and Laberta. Her life was spent raising her daughters, helping her husband on the farm, and serving the Macon Methodist Church as a Sunday school teacher and treasurer. Her husband – Edward passed away in 1982.

On October 24, 1987, she was united in marriage to Harold Kesler of Sabetha, Kansas. She accepted his 6 children and their families as her own. They spent their 14 years together as members of the Gideons, traveling and helping to establish the Evangelical Free Church in Franklin, Nebraska.

A celebration of life service for Evelyn Marie Dallmann Kesler will be (was) Thursday, April 25, 2019, at 10:30 a.m., at the Evangelical Free Church, Franklin, Nebraska, with Pastors – Bill Stearns, Scott Randall, and David Johnson officiating. The music will be (was) performed by Loren Schroder, Kylee Noonan, Dallas Haring, Eric Schroder, and Eden Schroder, with the hymns of “ The Anchor Holds,” “ It Is Well With My Soul,” and “Come To Jesus.” Melissa Holman will read (read) a tribute on behalf of her mother. Casket bearers will be (were): Shawn Haring, James Haussermann, Clay Haring, Steven Haussermann, Todd Haring, and Shay Haring. Honorary casket bearers will be (was): Shelly Schroder, Melissa Holman, Danielle Kneeland, and Kylee Noonan. Burial will be (was) in the Union Cemetery, Macon, Nebraska, next to her late husband - Edward Dallmann. The family suggests memorials to: Gideons International. Visitation will be (was) Wednesday, April 24, 2019, from 9:00 a.m. to 7:00 p.m. at the Hutchins Funeral Home, Franklin, Nebraska. Online condolences can be left at www.hutchinsfh.com. Hutchins Funeral Home, Franklin, Nebraska was in charge of arrangements.

Evangelical Free Church
To order memorial trees or send flowers to the family in memory of Evelyn Kesler, please visit our flower store.