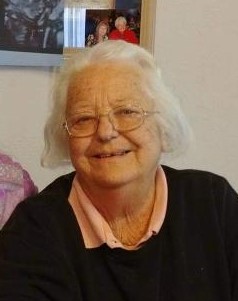 Family will not be present during the viewing at the funeral home. The casket will remain closed at the church Monday.

Evelyn Joyce (Hollis) Grabast was born November 21, 1939 in Clarinda, Iowa to Ora and Faye (Meyers) Hollis. She passed away on Tuesday, April 5, 2022 at the age of 82, at the Kearney Regional Medical Center, Kearney, Nebraska. She was eagerly waiting to meet her Lord and Savior and be joined again with three of her children in Heaven.

In 1956 Leroy and Evelyn moved back to Nebraska where Leroy took a job as a carpenter on the construction of irrigation canals. During the next ten years, Evelyn and Leroy lived in various communities in northern Kansas and all over Nebraska as Leroy continued to work on various canal projects. It was during this time their children were born. The couple moved their family to Franklin, Nebraska in the fall of 1965 where they have remained since that time in the same house where they raised their children.

Evelyn worked various jobs including Tilford’s Variety store and many years of janitorial services for homes and businesses, notably the Franklin Post Office and Valco Grain Elevator, both for nearly 20 years. In 1987 Evelyn and Leroy began a woodworking and crafting business which they enjoyed together for many years , most of those weekends spent at area craft shows.

Evelyn enjoyed baking, embroidery, crocheting, painting, gardening, and growing beautiful flowers in her yard. Evelyn was a member of the Franklin Evangelical Free church where she served many years in various roles (Kids Klub being her favorite), and she sang and enjoyed the Bible studies there.

She greatly enjoyed her grandkids and great grandkids and she loved Jesus with all of her heart. Her grandkids loved her Christmas cookies and candies, and especially her butterscotch dessert. She will be greatly missed on this side of Heaven; however, we rest easy knowing she is rejoicing with her children and all who have gone before her.

Evelyn was preceded in death by her parents Ora and Faye Hollis; her mother and father-in-law Lawrence and Inez Grabast; daughters Lucinda Grube and Teresa Hlavac-Grabast; son Timothy Grabast; granddaughter Haley Grabast; and her brothers Don Hollis and Gerald Hollis.

To order memorial trees or send flowers to the family in memory of Evelyn Grabast, please visit our flower store.