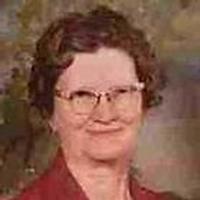 I, Eva J. (Bach) McNiff, of Franklin, Nebraska, was born June 13, 1911, at the family farm north of Stamford, Nebraska, to Theodore and Mary (Fossenberger) Bach. I was the youngest of 12 children.

In 1913, I moved with my family to a ranch near Dillon, Colorado. In 1916, I moved with the family to a farm southeast of Franklin, Nebraska, where I received my education at the Reams School District #32. On January 2, 1936, I was united in marriage to Thomas McNiff in Lincoln, Nebraska. This union was blessed with three sons - Howard, Richard, and Michael. We remained and farmed at the Bach family farm until 1946, when we purchased and moved to a farm north of Franklin until 2010, when I moved to town. I was a member of St. Katharine Drexel Catholic Church and its' altar society, a charter member of the Hillside extension club, and friendship club. I volunteered for the Red Cross for several years. I owned and operated the Skyline Poultry Plant from 1967 to 1976. My great interest and enjoyment were my children and families and caring for them. My hobbies included caring for my yard and flowers and sewing, especially quilt making.

I was preceded in death by my husband - Thomas; six brother; five sisters; and one grandson - Patrick McNiff.

I leave to mourn three sons and spouses - Howard and Bridget McNiff of Cook, Nebraska, Richard and Beverly McNiff of Franklin, Nebraska, and Michael and Sandra McNiff of Lincoln, Nebraska; eight grandchildren and 12 great-grandchildren.
I went to be with the Lord, Monday, January 14, 2013, at the Golden Living Center, Franklin, Nebraska, at the age of 101.
I would ask that in lieu of flowers, any remembrances of me be in the form of donations or pledges to - Franklin Fire Departments EMT, The Saint Catherine Drexel Altar Society, or The Franklin Senior Center.

Hutchins Funeral Home, Franklin, Nebraska, is (was) in charge of arrangements. Friends may leave condolences on line at www.hutchinsfh.com.

To order memorial trees or send flowers to the family in memory of Eva McNiff, please visit our flower store.