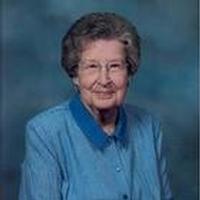 Ethel Viola (Knuth) Steinkruger was born on November 28, 1919, the youngest of six children, to Otto and Henrietta "Nettie" (Anton) Knuth in Oxford, Nebraska. She died and entered into eternal rest with God on Friday, November 06, 2009 at Good Samaritan Hospital in Kearney, Nebraska.
Ethel was baptized on March 20, 1920 at the Oxford German Methodist Church with Rev. John Lauer. She professed her faith and became a member of the Oxford Methodist Church on June 15, 1920 under the direction of Rev. Ahrendts. Ethel attended school in Oxford, and graduated from Oxford High School in 1937.
Ethel was very business oriented. She began working at Tompkins Café in Oxford, where she learned to cook. She then was owner and operator of Slim's Café in Oxford from January 1942 to July 1944. She then moved to Franklin, Nebraska in 1944, and began working at Franklin State Bank.
On February 10, 1946, Ethel married the love of her life, Wayne Steinkruger, at Kearney, Nebraska. The newlyweds made their home in the Franklin, Nebraska area. This union was blessed with the birth of four children, Roger, Rogene, Rodney and Rayma.

On December 12, 1945, Ethel transferred her church membership to the Franklin Methodist Church, and received a 50-year membership pin in 1983. Ethel enjoyed being a farm wife for many years. She then was bookkeeper for the Steinkruger Pioneer Seed from 1973 to 1997.
Ethel also was a member of Franklin First United Methodist Church and Hillside Extension Club for over 50 years, and a leader for the Cloverette 4-H group in Franklin. She served as the Financial Secretary for the Franklin First United Methodist Church for many years, and has been a historian of many events. She also enjoyed gardening, preserving foods, embroidery, traveling, and going to dances. But the real passion in her life was her family. She truly treasured every moment she was able to spend with them.
In 2003, Ethel was the spokesperson for the family as they received the Aksarben award for 100 years of continued ownership of the Steinkruger Family Farm.

She was preceded in death by her husband, Wayne, in 1980; one brother, Henry Knuth; four sisters, Rosina Schroeder, Laura Blank, Eda Marlatt and Edna Roberts.

Funeral services will be held on Monday, November 9, 2009 at 2:00 p.m. at the Franklin First United Methodist Church with Pastor Neil Kloppenborg officiating. Burial will be at Greenwood Cemetery in Franklin, Nebraska.

In lieu of flowers the family suggests memorials to the Franklin United Methodist Church.

To order memorial trees or send flowers to the family in memory of Ethel Steinkruger, please visit our flower store.