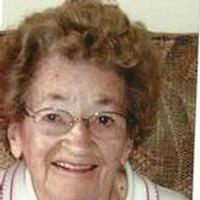 Esther went to school in Dolton. She graduated from Dolton High School, as Salutatorian of her class in 1933. She attended Dakota Wesleyan University and earned a normal teaching degree. After college, Esther taught grade school in Highmore, South Dakota, for two years, and then several other schools.

Esther met Doral Herman in 1948, and they were married on September 25, 1949, in Dolton, South Dakota. To this union three children were born - Arthur, Harland and Lois.

For 50 years, Esther lived on a farm near Riverton, Nebraska. She was always gardening and canning.

She was preceded in death by her parents; her husband, Doral; and three siblings - Fred, Lydia, and Erma.

A celebration of life service for Esther (Dirks) Herman will be (was) Friday, May 9, 2014, at 2:00 p.m., at the Crossgate Congregational Church, Franklin, Nebraska, with Pastor Kasey Loschen and Pastor Jim Hossler officiating. Interment will be (was) in the Greenwood Cemetery, Franklin, Nebraska, beside her husband, Doral Herman. Visitation will be (was) Wednesday, May 7, 9:00 a.m. till 5:00 p.m., and Thursday, May 8, 2014, from 9:00 a.m. to 7:30 p.m., at the Hutchins Funeral Home. The family will (did) receive friends from 6:00 to 7:30 p.m., Thursday, May 8, 2014, at the funeral home. The family suggests memorials to the Crossgate Community Church, Franklin, Nebraska.

Arrangements were arranged by Hutchins Funeral Home, Franklin, Nebraska. Online condolences can be left at www.hutchinsfh.com.

To order memorial trees or send flowers to the family in memory of Esther Herman, please visit our flower store.