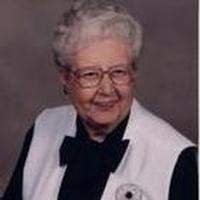 Erma L. Jelken, 91 years of age, of Franklin passed away Sunday, September 25, 2011 at Golden Living Center in Franklin, Nebraska . She was born on September 6, 1920 in Franklin County, Nebraska the only child of Albert A. Carlson and Mary E. (Gleason) Carlson. Erma was a graduate of Franklin High School.

She was preceded in death by her parents, husband, Albert Elmer Jelken, August 18, 1963 and son, Robert A. Jelken.

Erma lived her whole life in Franklin County, Nebraska. She worked as the "Society Editor" for the Franklin County Sentinel. She served Franklin County in many capacities; six terms as County Clerk, Register of Deeds, Election Commissioner and Clerk of the District Court. Erma was the first woman to be appointed Deputy County Clerk.

She was a member of the Nebraska Association of County Officials, the First United Methodist Church of Franklin and the first Franklin Girls Softball team.

Erma is survived by her son, James A. Jelken of Franklin, Nebraska and many other relatives and friends.

Funeral Services will be held at 10:30 am Thursday, September 29, 2011 in the Franklin United Methodist Church in Franklin. Interment at the Greenwood Cemetery, Franklin.

Memorials in care of the United Methodist Church Women.

Condolences may be left online at www.hutchinsfh.com.

Hutchins Funeral Home in charge of the arrangements.

To order memorial trees or send flowers to the family in memory of Erma Jelken, please visit our flower store.