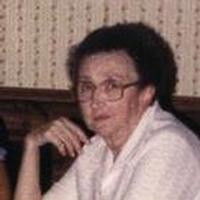 Emily M. Scherer was born April 22, 1921, to Emil and Bijauka Caroline (Stevenson) Lervig, at South Milwaukee, Wisconsin, and died April 14, 2007, at the Franklin County Memorial Hospital, Franklin, Nebraska, at the age of 85 years, 11 months and 22 days.

Emily was educated and a 1937 graduate from the Bertrand Public Schools in Bertrand, Nebraska. Emily and Arnold were members of the Christian Evangelical Free Church of Franklin, Nebraska. Emily went to Minot, North Dakota to work and later moved back to Holdrege in 1939. She was a housekeeper at the Plains Motel and Methodist Homes in Holdrege, Nebraska. She taught many people, including family, how to detail a room and make it spotless. Emily continued her teaching of housekeeping to the granddaughters in their own homes. With all the hard work she did with her hands, Emily had beautiful hands. She always had an emery board with her to keep her nails well manicured.

Emily also had E.S.P. If a family member had a bad day, in the mail would be an encouraging note from Em. Em always remembered holidays and birthdays, with a gift and always a card that made family feel like a special person on their special day.

She married Clinton Ridenour, and to this union one daughter was born, Roxann. Emily met and married Arnold Scherer on September 16, 1968, at Longview, Texas.

A celebration of life service for Emily M. Scherer was held Wednesday, April 18, 2007, at 11:00 a.m., at the Christian Evangelical Free Church of Franklin, Nebraska, with Pastor David J. Johnson officiating. Music provided by Mrs. Deb Jelken, as accompanist, and Mrs. Lois Goosic and Mrs. Joyce Lang, as a duet, sang "The Old Rugged Cross" and "In The Garden". The congregation sang "How Great Thou Art" and "Amazing Grace." Honorary casket bearers were: Jason Gladney, Ed Gardner, Chris Hosingston, and Guy Anderson. Graveside service was held at 3:00 p.m., Wednesday, April 18, 2007, at the Prairie Home Cemetery, Holdrege, Nebraska. Interment followed the service in the cemetery. The family suggests memorials and will name charities in honor of Emily M. Scherer at a later date.

Hutchins Funeral Home, Franklin, Nebraska, was in charge of arrangements.

To order memorial trees or send flowers to the family in memory of Emily Scherer, please visit our flower store.