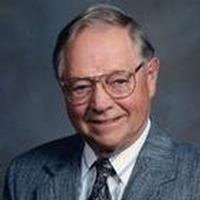 Emil Karl Sindt was born on September 22, 1917 to Karl and Meta (Rademacher) Sindt. He was
their only child and was raised by his step-mother Amanda (Amman) who was the mother of
Emil's brothers and sister. He passed away on Saturday, September 1, 2007 in Franklin, Nebraska at the age of 90 years, 11 months and 11 days.

Emil was raised on his father's farm north of Naponee, Nebraska and attended school in Naponee
through his High School years, and one year at Kearney College. He attended church through his
school years at St. Paul's Lutheran Church, North of Republican City, Nebraska where he was
baptized and later confirmed on August 8, 1932.

Emil was owner and operator of Sindt's Clothing Store in Franklin. He served many years as a
the Methodist Church Lay Leader as well as Sunday School teacher. Emil became and avid
painter after retiring from his clothing business, and many of his painting can be found in homes
of friends and family members around the country.

Emil and Norma (Steinkruger) were united in Holy Matrimony on May 12, 1940. They began
their married years in Nebraska City, and then relocated to Kearney, Nebraska where Emil was
employed at the Kearney Air Base during the war years. It was in Kearney where they gave birth
to their two daughters, Joyce and Janice. Following the war years, Emil and Norma relocated to
Franklin where he began his men''s clothing business that lasted over 40 years. Emil and Norma
were members of the United Methodist Church here in Franklin continuously since 1945. Emil
devoted many of those years to lay leadership in church and was a teacher in the adult Sunday
School program.

He has been preceded in death by his parents, step-mother Amanda, and by his beloved wife
Norma who departed this earth on June 4, 1989 along with a brother, Wayne, First Lieutenant, U.
S. Army, who was killed in action in the European Theater during WWII.

Funeral services will be held on Friday, September 7, 2007 at 2:00 PM from the United
Methodist Church in Franklin, Nebraska. Pastor Neil Kloppenborg will officiate. Friends may
call or stop by the funeral home on Thursday from 8:00 AM - 8:00 PM. A memorial will be
established and may go in care of the family at this time. Burial will be in the Greenwood
Cemetery at Franklin, Nebraska.

To order memorial trees or send flowers to the family in memory of Emil Sindt, please visit our flower store.