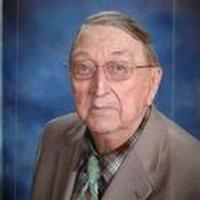 Elmer was baptized on May 29, 1919, at Macon, Nebraska, and he was confirmed on April 14, 1935, at Our Redeemer Lutheran Church in Ash Grow Township. He attended school in the Macon area schools until the 8th grade. Elmer married Velma Fegter on May 4, 1941, at Big Springs, Nebraska. To his union 5 children were born. Elmer was a family man, a farmer, and a member of the Grace Lutheran Church, Franklin, Nebraska.

John 3:16 "For God so loved the world, that he gave his only begotten Son, that whosever believeth in him should not perish, but have everlasting life."

A celebration of life service for Elmer F. Adam was held on Saturday, September 28, 2013 at 11:00 a.m. from the Grace Lutheran Church in Franklin, Nebraska, with Pastor Chad Boggs officiating. Music was with Mrs. Connie Kahrs, organist and the hymns were: "I Know My Redeemer Lives," "How Great Thou Art" and "I'm But a Stranger Here, but Heaven is my Home." Casket bearers and Honorary Casket bearers were: Michael Adam, Cecil Schriner, Maynard Schriner, Jr., Reggie Ortgiesen, Karl Magdsick, Ben Adam, Greg Magdsick, and Ryan Adam. Interment was in the Greenwood Cemetery at Franklin, Nebraska. Visitation was held on Friday, September 27, 2013, from 9:00 am to 8:00 pm at the Hutchins Funeral Home, Franklin, Nebraska. Memorials are suggested to go to Grace Lutheran Church, or Franklin Senior Citizens Center, in care of the funeral home. Condolences may be sent to Hutchins Funeral Home, 1402 M Street, Franklin, Nebraska 68939 or in care of www.hutchinsfh.com.
Hutchins Funeral Home of Franklin, Nebraska was in charge of the arrangements.

To order memorial trees or send flowers to the family in memory of Elmer Adam, please visit our flower store.