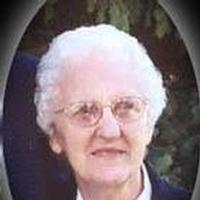 Elfrieda Gertrud Stuhmer, the daughter of Reverend Ernest and Alma (Turk) Baack, was born on August 11, 1925 in Malone (Walling), Texas. She passed away on July 27, 2011 at the Golden Living Center in Franklin, Nebraska, at the age of 85 years, 11 months, 16 days.

She attended country school in Texas, where she remembers riding to school in a horse drawn buggy with her siblings. Her parents moved to Pyrmont, Missouri, where she finished school graduating from Stover High School in 1943. While in high school she played volleyball and softball. Elfrieda loved music, she sang in the chorus and glee club, played the violin in the high school orchestra and string sextet.

After graduating high school she moved to Kansas City, Missouri, and worked at The System Bible Company. She moved to Genoa, Illinois, and would hitch hike to work in Dekalb. Then on to Columbus, Ohio, where she worked for Augsburg Publishing House. She attended Capital University for a year and a half in Columbus, Ohio. She also worked in Holdrege and Lincoln, Nebraska, and Denver, Estes Park and Greely, Colorado.

While visiting her brother Ernest in Macon, Nebraska, she met Carl Stuhmer, they started dating and were married on April 25th, 1948, at Zion Lutheran Church. To this union three children were born. They lived on the farm where Carl was born and grew up until 1992 when they moved to Franklin.

Elfrieda was a life long Lutheran and a faithful member of Zion Lutheran Church serving in WELCA, singing in the choir and many other activities. She was a caregiver not only to her family but to many neighbors. Cookies, coffee and a helping hand were always at the ready. She was engaged in the chicken business, supplying hatching eggs for neighbors and her family. She always had a garden helping feed family and neighbors.

Elfrieda was preceded in death by her parents; husband Carl, June 7th, 2009; her brothers Ernest and Edward.

Memorials are suggested to go to donor's choice

Hutchins Funeral Home of Franklin, Nebraska is in charge of the arrangements.

To order memorial trees or send flowers to the family in memory of Elfrieda Stuhmer, please visit our flower store.