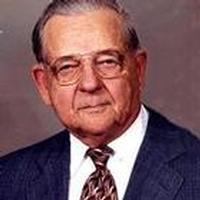 Edwin Jacob Frerichs of Hildreth, Nebraska passed away on November 26th, 2011 at the age of 83 years, 7 months and 1 day at the Golden Living Center in Franklin, Nebraska.Edwin was born on April 25th, 1928 near Gurley, Nebraska. He was one of fourteen children born to Jacob and Anna (Sanders) Frerichs.

He served our country in the Army from February 1952 to November 1953 attached to the Third Division, 15th Infantry, Company C during the Korean War.

Edwin lived near Gurley and Dalton in western Nebraska until age 18. He then moved to a farm north of Bloomington and farmed there and near Macon and later near Minden. He enjoyed farming and trying new methods of farming. In his spare time he enjoyed wood working and building and remodeling homes. He especially enjoyed having his family around him.

Edwin was preceded in death by his parents, his daughter, Peggy Covey, his son, Bruce Frerichs, nine brothers and four sisters.

Funeral services will be held on Saturday, December 3, 2011 at 11:00 am from the Grace Lutheran Church in Franklin, Nebraska with Rev. Chad Boggs officiating.

Interment will be in the Greenwood Cemetery at Franklin, Nebraska with full military rites.

Memorials are suggested to go to Family Choice.

Hutchins Funeral Home of Franklin, Nebraska is in charge of the arrangements.

To order memorial trees or send flowers to the family in memory of Edwin Frerichs, please visit our flower store.