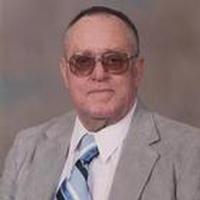 Edward L. Albers, age 82 of Franklin, formerly of Bloomington, passed away at Golden Living Center in Franklin on April 10, 2014 He was born on October 3, 1931 to George F. and Evelyn (Graham) Albers on a farm near Huntley, Nebraska. He was baptized at St. Peters Church in Hildreth on October 25, 1931. He was confirmed in the Lutheran faith at Our Redeemer Lutheran Church in Ashgrove on April 28, 1946. His early school years were at Bloomington through the 11th grade. Ed entered the service on July 15, 1952 and served in the Korean War until he was discharged on April 14, 1954. He was a Corporal in the U.S. Army. He married Patricia A. Knudsen in November of 1956. To this union four daughters were born--Leanna Evelyn, Tamara Sue, Mary Elizabeth, and Sherri Ann. They later divorced. He married Joyce Hadley Crouse and gained five step-children--Cindy, Randall, Brian, Michael, and Curtis. Ed was a full time farmer who raised corn, wheat, cattle and hogs. He loved the farm. He also was the school bus driver for Bloomington school for many years and substitute mail carrier for the Bloomington Post Office. He was a member of the Bloomington Paul Hart Unit #145 American Legion Post and was fire chief of the fire department in Bloomington. Ed was preceded in death by his parents, brother Wayne, sisters Dorothy Gardner and Shirley Saathoff, two step-sons Michael and Curtis Crouse. He is survived by wife Joyce of Golden Living Center, daughters Leanna Monie and husband Rick of Ogallalla, Tamara Adam and husband James of Franklin, Mary Albers of Minden, and Sherri Frerichs and husband Brian of Franklin, 11 grandchildren, 12 great grandchildren, 9 step-grandchildren and 7 step-great grandchildren, sister Georgette Kuehn and husband Danny of Sapulpa, Oklahoma, and a host of nieces and nephews. Funeral services were (will be) held at 10:30 am Monday, April 14th at Grace Lutheran Church in Franklin. Interment was (will be) at Greenwood Cemetery in Franklin with full military honors.

Memorials have been established to Franklin, NE EMT’s. Hutchins Funeral Home of Franklin, NE in charge of arrangements.

Condolences may be left with www.hutchinsfh.com

To order memorial trees or send flowers to the family in memory of Edward Albers, please visit our flower store.