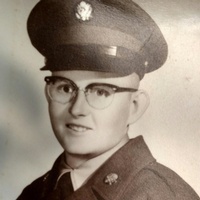 Duane grew up in Sutton and helped his father during high school at the Ford Garage in Sutton. After high school, he went to college in Omaha to pursue a degree as a Graphic Artist. In 1955, Duane joined the United States Army and was stationed in Fort Hamilton, New York. Duane was honorably discharged in December of 1962. He married Helen Audry Miller in Omaha, Nebraska, on February 27, 1960. To this union five children were born. Duane worked many years as a print press designer/operator for the Clay County News in Sutton, Hastings Tribune and LIPS (Lisa’s Instant Print) in Kearney. Duane enjoyed playing his drums from such a young age until his health started to fail about 10 years ago. If music was ever playing you could look over and see his foot tapping to the beat. He played in many bands over the years including Blue River Review and DJ and the Country Boys.

Duane was preceded in death by his wife – Helen, three grandchildren, his brother – Robert Wach, and nephew – Bobbie Wach.

Grave side service will be Tuesday, January 22, 2019, at 11:00 a.m. at the Presbyterian Cemetery, near Campbell, Nebraska. Military honors will be given by Nebraska Army National Guard Honor Guard, and Willie Fierstein Post No. 169 of Campbell, Nebraska. Interment followed services in the cemetery. Visitation will be at Hutchins Funeral Home, Franklin, Nebraska, on Monday, January 21, 2019, from 9:00 a.m. to 7:00 p.m. The family will be present to receive friends from 5:00 p.m. to 7:00 p.m., Monday, January 21, 2019, at the Funeral Home. Memorials may be sent to Art Wach at PO Box 178, Campbell, Nebraska 68932. The family is providing lunch at the Campbell Community Center.

Prebysterian Cemetery
To order memorial trees or send flowers to the family in memory of Duane Wach, please visit our flower store.