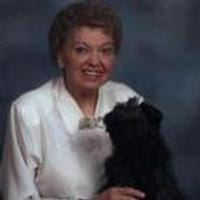 Dorothy Ellen (Krist) King, 77, of Franklin, formerly of Omaha, Nebraska, passed away on Friday April 23, 2010 at Bethany Home in Minden.

Dorothy was born February 6, 1933 to Tony and Fern (Strangman) Krist. She grew up in the Franklin area and graduated from Franklin High School with the class of 1950.

Dorothy married James "Jim" King and they lived in the Omaha area. Jim passed away in 1992 in Omaha.

Dorothy was a member of Franklin United Methodist Church. She worked for the Police Department and Immigration and Naturalization Service in Omaha, Nebraska. In 1989, she enjoyed working in Rome, Italy

Dorothy was involved in several organizations while living in Omaha. She was active with AMWAY and the Foresters. Dorothy also did volunteer work to advocate for persons with disabilities.

Dorothy loved animals and had many dogs during her lifetime.
Her favorite activities were traveling, singing, playing BINGO and spending time with her family.

Dorothy was preceded in death by her husband, her parents, and brother-in-law Dave Brownell.

Funeral Services will be held Monday, April 26, 2010 at 2:00 PM at the Evangelical Free Church in Franklin, Nebraska with Pastor David Johnson officiating. Burial will be at the Greenwood Cemetery in Franklin, Nebraska. Visitation is 1 PM to 5 PM Saturday and 1 PM to 8 PM on Sunday at Hutchins Funeral Home. The family suggests memorials to the Franklin Alumni Scholarship Fund.

To order memorial trees or send flowers to the family in memory of Dorothy King, please visit our flower store.