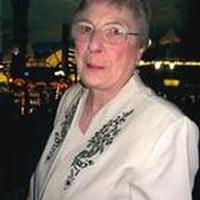 Doris Yvonne Roberts departed this life on Sunday, November 3, 2013 at Longmont
United Hospital in Longmont, Colorado. She was 82 years old.

Doris was born on March 21, 1931 to the proud parents of William Lawrence and
Anna (Thomas) Butterfield. She was born on a farm on the south side of
Bloomington, Nebraska.

Although growing up on the farm could be difficult at times, the family was loving
and supportive; it was able to provide for itself, making sure no members ever went
hungry. As a little girl, Doris could be found playing house in a circle of trees on the
farm, always with her dolly made of sticks by her side. Everybody in the family
worked together to get chores done; laundry was Doris' responsibility, a chore she
hated. She did, however, love dancing to music and spent her time cheerleading in
school.

Because of work, Doris' family moved often. They moved from Bloomington to
Kearney, Nebraska, where the family lived until 1942. From Kearney, they traveled
to Mission San Jose, California. 1947 found the family in Flippen, Arkansas, and by
1948, they were back in Bloomington, Nebraska. Finally, the family settled in
Franklin, Nebraska in 1949, with a short stop in Dodge, Nebraska in 1948.

While working as a waitress in 1949, Doris met Bob Sweet. They fell in love and
married on February 2,1950. The couple lived in Franklin until 1956. After moving
to Derby, Colorado, Bob and Doris welcomed two sons, Willard (Bill) and Steven. In
2000, they moved to Culbertson, Nebraska, but soon went back to Colorado to be
closer to family. Doris lived in Longmont, Colorado from 2006 until her passing.

Doris Yvonne Sweet Roberts is preceded in death by her husband Robert (Bob) Sweet,
her parents, and her brother John Metz.

Visitation will be from 10am to 11am Friday, November 8, 2013 at the Hutchins Funeral Home in Franklin, NE. Graveside service and internment will be at 11at Greenwood Cemetery in Franklin. Visit www.ahlbergfuneralchapel to share condolences.

To order memorial trees or send flowers to the family in memory of Doris Roberts, please visit our flower store.