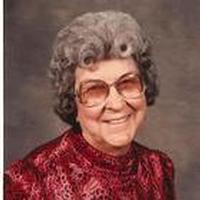 Dora F. (Tobiassen) Schmidt Griffin was born on July 22, 1927, daughter of T.J. (Jerry) and Tena (Bienhoff) Tobiassen on a farm north of Franklin, Nebraska. She departed this life at the Golden Living Center in Franklin, on July 31, 2012 at the age of 85.

Dora attended grade school at Lakeview School District 67 and graduated from Franklin High School with the class of 1944.

On April 4, 1948 she was united in marriage to Raymond Schmidt. The newlyweds made their home in Franklin, Nebraska. This union was blessed with two children.

After Raymond's untimely death on October 20, 1955 at Independence, Missouri, Dora continued living in Franklin with her two small children. On June 18, 1961, she was united in marriage to Harry Griffin. To this union one son was born.

She was a member of the First United Methodist Church of Franklin, Nebraska, and had taught Sunday School for several years.

She was preceded in death by her parents; her husbands, Raymond Schmidt and Harry Griffin; brother, Albert Tobiassen and sister, Lizzie Stearley.

Inurnment at Greenwood Cemetery in Franklin, Nebraska at a later date.

To order memorial trees or send flowers to the family in memory of Dora Griffin, please visit our flower store.