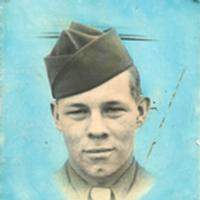 Donald Neil Hughes of Franklin, Nebraska, passed away May 26th, 2016 at the age of 87. He was born April 16th, 1929 to Earl and Francis (Strayer) Hughes. He was born in Franklin and attended school at Smoky Hill and the Franklin School. After school, he joined the Air Force and served in the Korean War. He married Mary Hays and had two daughters, Dora and Donna. They later divorced. On Nov. 25th, 1966, Don married Mardel (Farrell) and daughter Colleen.
After retiring in 1981, they returned to Franklin where they were involved with American Auxiliary, delivered Meals on Wheels, and were active in the community.
Don was preceded in death by his wife Mardel, his parents, infant daughter Dora, brother Leroy, and sisters Doris, Viola, Nettie, Wilma, and Wanda "Val Jean". He is survived by daughter Donna, daughter Colleen and Lyle Titkemeier, grandchildren Cherie Bahm, Amy Kahrs & husband Dennis, Leslie Konen & husband Jason, 8 great-grandchildren, and 2 great-great- grandchildren.
Memorial graveside service will be 2:00 p.m., Saturday, May 28, 2016, at Maple Grove Cemetery, Bloomington, Nebraska, with Pastor Scott Randall officiating. Military honors will be given by Bloomington American Legion. Inurnment will follow the service in the Maple Grove Cemetery, Bloomington, Nebraska. Memorials can be made to the Franklin EMT's and to the Franklin Senior Center. Hutchins Funeral Home, Franklin, Nebraska, was in charge of arrangements. Online condolences can be left at www.hutchinsfh.com.

To order memorial trees or send flowers to the family in memory of Donald Hughes, please visit our flower store.