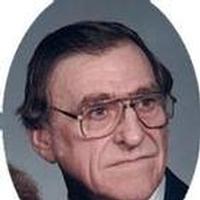 Delmar was born in Riverton, Nebraska, on August 23, 1921, to Ernest and Inez (Marsh) Hall. He attended Spring Valley country school. He served in the Army during World War II in the European theater. Upon his return, he began farming in the Riverton area with his family.

On May 20, 1950, he married Alice Fredricka Kubicek and to this union was born four children: Gary, Patricia, Curtis, and Bradley.

Delmar studied electronics technology and received a degree from Coyne Technical Institute in Chicago, Illinois, in 1963. The family moved to Hastings in 1967 where he further pursued a career in electronics, working for Sears. Upon retiring, in 1988, Delmar and Alice returned to live in Campbell, Nebraska, where Delmar remained active in farming.

Throughout his life, Delmar had a passion for music and was an accomplished saxophone player. He not only played in his own family band for dances and weddings in Campbell and the surrounding area, but also formed a band with his children and played various places in Nebraska for many years.

Delmar was a member of the American Legion-Willie Fierstein Post #169 in Campbell, as well as the Fraternal Order of Eagles in Hastings, where Alice and he spent many enjoyable hours dancing.

Funeral services will be held on Thursday, April 29, 2010, at 2:00 p.m. at the First United Methodist church in Franklin, Nebraska. Burial will be at Greenwood Cemetery in Franklin, Nebraska. Hutchins Funeral Home is in charge of arrangements. The family suggests memorial contributions may be given to the Campbell Volunteer Fire Department, the Mid-Rivers 911 Center, or the South Central Area Agency on Aging.

To order memorial trees or send flowers to the family in memory of Delmar Hall, please visit our flower store.