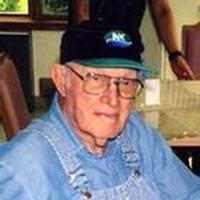 Services are Friday, June 12, 2009, at 10:00 a.m., at the Westminster United Presbyterian Church in Campbell, Nebraska, with Pastor C. L. Wimer officiating. Burial with Masonic and Military Rites by the Willie Fierstein Post # 169 of Campbell will be in the Upland Cemetery, Upland, Nebraska. Visitation will be 9a.m. to 9p.m. Wednesday, and Thursday, at the Hutchins Funeral Home, Franklin, Nebraska, and one hour prior to service at the church on Friday.

Dallas was born on August 18, 1919, to George and Dorothy (Koch) Koch, on the farm three miles west and one mile south of Campbell in Franklin County, Nebraska. He was the oldest of four sons. He attended country school and graduated from Campbell High School in 1938. Dallas farmed until right after Pearl Harbor, and then enlisted in the Army Air Corp. After his honorable discharge in 1945, he returned to Campbell to farm. In 1946, he and his brother Wallace started Koch Brothers Construction Company. In the early 1950s he became a full time farmer.

Dallas was united in marriage to Pauline "Polly" Cole, on April 16, 1944, in Dallas, Texas. To this union were born three children: Ellen, James, and Lauris.

Dallas and family moved to the farm south of Campbell in 1949. He was a man who loved God and his family above all else. He was a good friend and neighbor to many and always willing to lend a hand when needed. The love of the land can be seen by his stewardship.

Dallas was a member of Willie Fierstein Post #169 in Campbell for over 60 years and served as their chaplain for over 30 years. He was also a member of the Masonic Lodge at Franklin.

Dallas is survived by his three children: Ellen and husband, Tom Hammond of Omaha, Nebraska, Jim and wife, Nancye, of Hastings, Nebraska, and Lauris of Campbell, Nebraska; five grandchildren, and six great-grandchildren. He was preceded in death by his wife, Polly; his parents; his brothers, Wallace and two infant brothers; and his stepmother, Ethel.

To order memorial trees or send flowers to the family in memory of Dallas Koch, please visit our flower store.