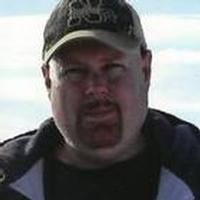 Curtis Nathan Crouse was born February 20, 1973, to Francis and Joyce (Hadley) Crouse, at Lincoln, Nebraska, and went to be with the Lord, Monday, October 15, 2012, at Good Samaritan Health Systems, Kearney, Nebraska, at the age of 39 years, 7 months, and 25 days.

Curtis started his elementary schooling in Lincoln, Nebraska, then Bloomington, Nebraska. He graduated High School in Hildreth, Nebraska in 1991. Curtis followed his dreams and entered Central Community College in Hastings, Nebraska and studied Auto Body work. After school he moved to Kearney, and in 2001 purchased a home in Minden. He met Tanya Crouse and they were married on October 4, 2005 in Hastings, Nebraska. To this union three children were born: Nicholas, Trevor, and Rachael.

Curtis was active in the lives of his children. He always referred to them as my boy and baby girl. Curtis took them fishing, four wheeling, and they watched Nascar together. He could be found working on friends' cars and his own with friends and Nicholas at his side. He was employed at Eaton Corp in Kearney, Nebraska, making pistons and valves for Toyota.

He is survived by his son, Nicholas, daughter, Rachel, and their mother, Tanya Crouse all of Franklin, Nebraska; his mother, Joyce and husband, Edward Albers, of Franklin, Nebraska; brothers - Bryan Crouse, of Lincoln, Nebraska, and Randall and wife, Sonya Crouse, and their children - Ryan and Hailey of Hickman, Nebraska; sister - Cindy and husband, Jim Lind and their children - Michael, Heather, Bill, Courtney, Michelle, Nicholas, and Chelsea; and a host of other relatives and friends.

The family suggests memorials be given to the children's education fund.

Hutchins Funeral Home, Franklin, Nebraska, was in charge of arrangements.

To order memorial trees or send flowers to the family in memory of Curtis Crouse, please visit our flower store.