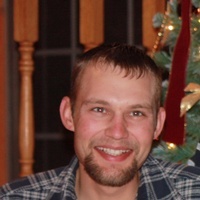 Brent grew up on the farm and enjoyed all the farm had to offer. He enjoyed being able to ride the 4-wheelers, dirt bike, tractors, and learning how to drive a young age. He spent many summers “camping out” at the hay field. While dad swathed hay the kids passed the time away in the camper and riding bikes. He participated in 4-H and FFA growing up. Brent learned an excellent work ethic on the farm and found his calling for construction during high school. He graduated in 2003 from Franklin Public Schools. After high school, he attended North Central Community College in Beloit, Kansas, and studied construction technology. After college he began a career in construction and took pride in his work.

Brent wasn’t scared to work hard, but he also had many hobbies. He had a passion for working on his old Chevy pickups and driving them around the countryside. Brent liked when it rained so he could play in the mud. When summertime hit, he loved tubing down the river with friends, and going on mud drags with is brothers. During the winter his favorite pastime was going hunting. His biggest enjoyment was simply getting together and hanging out with his friends.

Services for Brent Pedersen will be held at a later date. Inurnment will be in the Stevens Cemetery, rural Franklin, Nebraska. Online condolences can be left at www.hutchinsfh.com. Hutchins Funeral Home was in charge of arrangements.

To order memorial trees or send flowers to the family in memory of Brent Pedersen, please visit our flower store.