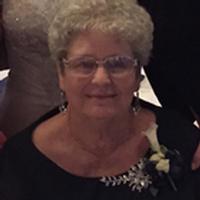 Bonnie Jean (Schriner) Flesner was the third child of Wilber and Geraldine (Reese) Schriner. She was born on March 29, 1948 at Campbell, Nebraska. Bonnie passed away on October 22, 2015 in Franklin, Nebraska at the age of 67.

She was baptized at the Grace Lutheran Church in Franklin, Nebraska. She became a member of the Franklin Methodist Church and later, after her marriage to Roger, she was confirmed into the St Paul Lutheran Church (later to become Trinity Lutheran) in Hildreth, Nebraska on December 3, 1967. She was a Sunday school teacher, superintendent, Bible school teacher and director for many years. She was also her church's Lutheran Brotherhood Communicator for many years and served as Vice President of the branch.

After high school, Bonnie worked at Slim's Café from June of 1966 until May of 1967. She also worked for Jurgens Farm Supply in Wilcox and was employed at the Franklin County Sheriff's Office as a 911 Dispatcher/Jailer until April 15, 2013.

She was united in marriage to Roger E. Flesner at St. Paul's Lutheran Church in Hildreth, Nebraska on August 6, 1967. She and Roger resided on the family farm southwest of Hildreth until they retired in 2002. They then moved to Franklin, where she continued working for the Sheriff's Office until her health deteriorated and she retired. She enjoyed working with the other dispatchers and her officers.

In 1973, Bonnie's dream came true when she and Roger became the parents of a baby boy, Brian Reese, born on October 28, 1973. She felt God had truly smiled on them with this young man. Just as she thought her world could not get better, God smiled on them again and sent another gift of a beautiful daughter, Christina Joann, born on July 11, 1979.

In time her family grew with the addition of 3 terrific grandchildren-Brenden and Lindsay Flesner and Hadleigh Oldfather. They brought many wonderful memories and fun to her life.

Being a mom was the most important thing in the world to Bonnie. She also enjoyed the days when she was able to have nieces and nephews stay at her house.

She leaves to mourn her passing: her husband, Roger of 48 years, of Franklin; son, Brian and his two children, Brenden and Lindsay of Seward, Nebraska; daughter, Christina Oldfather, her husband David, and their daughter Hadleigh of Lincoln, Nebraska; brother Ed Schriner and his wife Doris, of Holdrege, Nebraska; and many nieces, nephews, and special friends.

To order memorial trees or send flowers to the family in memory of Bonnie Flesner, please visit our flower store.