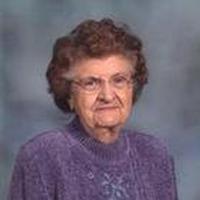 Betty June (Sanger) Schmidt was born the only child of Andy and Minnie (Johnsen) Sanger on June 5, 1931 on a farm southeast of Macon, Nebraska. She departed this life in Lincoln on June 5, 2012 at the exact age of 81.

Betty was baptized in the Lutheran Church west of Macon, Nebraska on October 11, 1931 by Pastor C. Weber and confirmed March 25, 1945 by Rev. M.J. Haferman. Betty's confirmation verse was Psalm 111:10 "The fear of the Lord is the beginning of wisdom. A good understanding have all they that do his commandments, his praise endureth forever."

Betty was united in marriage to LaVerne Schmidt on October 1, 1950, to this union two children were born.

After her marriage she enjoyed helping her husband farm. She also worked in the kitchen at the Franklin County Memorial Hospital for many years and attended Grace Lutheran Church faithfully until she moved to Milford, Nebraska in October 2003.

She moved to Milford to be closer to her family, there she attended Good Shepherd Lutheran Church. She enjoyed cooking for the residents of the Crestview Nursing Home and helping her family. She especially enjoyed cooking and caring for the children at the Little Leaps of Faith child care center.

She was preceded in death by her parents.

Memorials to Family's Choice in care of the Hutchins Funeral Home.

To order memorial trees or send flowers to the family in memory of Betty Schmidt, please visit our flower store.