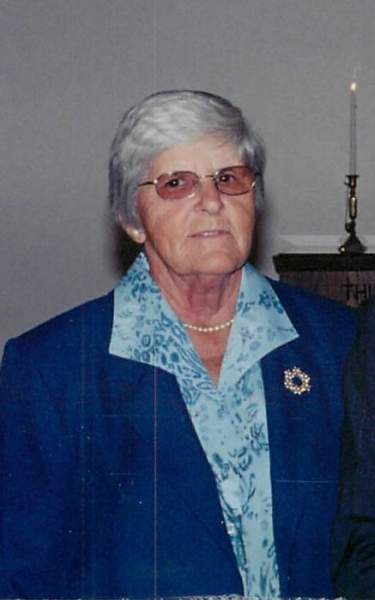 The funeral service for Goldean will be live streamed on the Hutchins Funeral Home Facebook Page.

Bertha Goldean Drake age 89 of Franklin, Nebraska passed away Tuesday, May 18, 2021 at the Arbor Care Center in Franklin. Goldean was born on July 29, 1931 on the family farm 4.5 miles south of Woodruff, Kansas. She was the seventh child born to Arthur and Olive (Torgerson) Jackson.

Goldean was united in marriage to Loy Drake on April 17, 1954. They celebrated 63 years of marriage before Loy’s passing on November 11, 2017. The couple moved to their farm southwest of Bloomington, Nebraska in October 1957. They would live on their farm for over 60 years.

In 1989, Goldean opened “Goldean’s Collectables” in which she sold the antiques and collectables that she and Loy had purchased at the many auctions they enjoyed attending. She also displayed and sold some of her crocheted afghans, doilies, lace and other handiwork she had made.

In late 2019, Goldean made her home at the Arbor Care Center, where she was lovingly cared for by the staff.

Funeral services were held Thursday, May 27th, 2021 at Hutchins Funeral Home, Franklin, Nebraska with Pastor Scott Randall of Naponee, Nebraska officiating. Goldean was laid to rest by her husband Loy in Maple Grove Cemetery, Bloomington, Nebraska. A memorial will be designated by the family at a later date. Hutchins Funeral Home assisted the Drake family with these arrangements.

To order memorial trees or send flowers to the family in memory of Bertha Drake, please visit our flower store.