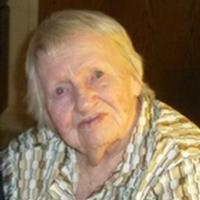 Barbara Ellen (Houtz) Muckel was born July 31, 1925, the middle child of Peter and Edna (Goodrich) Houtz of Naponee, Nebraska. She passed peacefully, with her son at her side, on June 4, 2017, at Franklin, Care and Rehabilitation Center, Franklin, Nebraska, at the age of 91 years and 10 months.

Barbara attended 1st through 6th grades at Naponee, 7th through 11th grades at Bloomington, and graduated from Alma High School. She graduated with her Registered Nursing degree from Mary Lanning Hospital, Hastings, Nebraska.

January 9th, 1947, she married Francis L. Muckel, and to this union four children were born - Judy, Mary, Roger and David. They raised their family in Bloomington.

Barbara was a member of the Bloomington Methodist Church, American Legion Auxiliary, and the Order of the Eastern Star. She was an avid reader, and loved doing crossword puzzles and jigsaw puzzles. Playing cards with her friends was another hobby that she looked forward to. Her passion for quilting produced many quilts which she passed on to family members. She and Fritz also owned and operated an antique store for many years in Bloomington.

Barb's canning was a work of art in which she took much pride - everything from meats to veggies and fruits. Baking pies for community events also kept her busy.

She was preceded in death by her husband - Francis, her parents - Pete and Edna, and her brothers - Leonard and Bill.

Memorial graveside services for Barbara E. (Houtz) Muckel will be at 11 o'clock, Saturday, June 24th, 2017, at the Maple Grove Cemetery, Bloomington, Nebraska. Inurnment will follow the service in the cemetery. The family suggests memorials to: Bloomington Auxiliary, in care of the family. There will be a luncheon following the service at the Agriculture Bulding at the Franklin County Fairgrounds, Franklin, Nebraska.

Hutchins Funeral Home, 1402 M. Street, Franklin, Nebraska 68939, was in charge of arrangements. Online condolences can be left at www.hutchnsfh.com.

To order memorial trees or send flowers to the family in memory of Barbara Muckel, please visit our flower store.