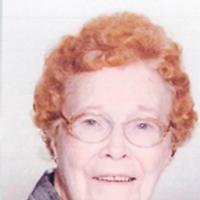 Avis Leona (Hall) Schmidt was born on August 27, 1915, in the Spring Valley area. She passed away on June 16, 2015, at the Golden Living Center in Franklin, Nebraska at the age of 99 years. She was one of ten children born to Ernest Hall and Inez (Marsh) Hall and lived in the Spring Valley area while she was growing up.
Avis graduated from McPherson County High School in Tryon, Nebraska with the class of 1935 and soon thereafter received her "Normal Training Certificate" to teach rural schools in the Ringgold, Nebraska community and later in the Spring Valley area.
On May 20, 1936, she was united in marriage to Adolph Schmidt at Ringgold and in 1953 they moved their family to a farm eight miles north of Riverton, in the Spring Valley area. She is survived by her sister, Doris Thompson, Kearney, Nebraska. Surviving children and their spouses are: Joe and Pam Schmidt, Campbell, NE; Carol Kingsley, Lincoln, NE; Gene and Sandra Schmidt, Franklin, NE; Bill and Kay Schmidt, Franklin, NE; and Ronda Schmidt, Lincoln, NE. She is also survived by ten grandchildren, 27 great grandchildren, and many nieces and nephews.
She was preceded in death by her parents, Ernest and Inez; her husband Adolph; her brothers Kenneth, Delmar, Oller (Bill), and her sisters, infant twins Darlene and Maxine, Della Black, Valerie Traphagan and one infant grandson, Travis Schmidt.
Music was a big part of Avis's life. Her family was very musical and she played piano in the family band after learning to chord at about seven years of age. She also played piano for church services at Spring Valley Church, dances in Macon and Miller, at the Franklin Nursing Home, and on many other occasions.
She and her husband, Adolph, retired to Franklin, Nebraska in 1977. She and her mother Inez owned and operated S & H Ceramics for many years and she enjoyed gardening, music, crocheting, oil painting and quilting.

To order memorial trees or send flowers to the family in memory of Avis Schmidt, please visit our flower store.