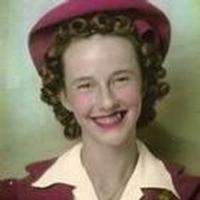 ?Arlene B. Andelt, was born on March 5, 1926 to Henry and Emmi (Eicke) Kahle in Milford,
Nebraska, and passed away suddenly on March 28, 2007, at her home in Franklin, Nebraska, at
the age of 81 years, and 23 days. She was raised on a farm near Milford, along with her brother,
Al, and sisters Ruth, and Velma. She attended Milford High School, graduating in 1943.

Arlene taught in a rural school for 2 years. In 1945, Arlene met Stanley Andelt, a pharmacist,
while both were working at Hoyer Drug in Crete, Nebraska. They were married on April 3,
1946, and moved to Cozad, Nebraska, to work in the Walgreen's Store. In January of 1947, they
moved to Holdrege to work for Noble Drug. Arlene and Stan had 2 daughters, Debra, a
pharmacist, from Kearney, and Shelley, an elementary school teacher from Lincoln. Arlene and
Stan purchased a drug store in Franklin, in 1956. Andelt Rexall Drug Store was operated by Stan
and Arlene until their retirement in 1995.

Arlene enjoyed helping people and managing the store. Arlene also enjoyed being a member of
Franklin Women's Club, and other various clubs. She liked projects, and excelled in sewing for
her daughters, doing needle work, painting, playing piano and organ, and listening to music. She
and Stan greatly enjoyed time spent together doing photography. Her cat, Thomas, helped to fill
a large void in her life after Stan died.

Preceding her in death were both parents, her husband, two sisters, and one brother.

Arlene is survived by her daughters: Debra and husband, Russell Hansen of Kearney, Nebraska,
and, Shelley Andelt, of Lincoln, Nebraska.

To order memorial trees or send flowers to the family in memory of Arlene Andelt, please visit our flower store.