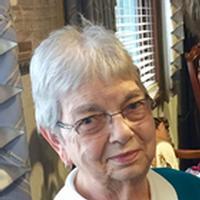 Ardyce attended several rural schools in Franklin, County. She graduated from Franklin High School in 1952. After graduating, she earned her Registered Nursing Degree from Methodist Nursing School in Omaha, Nebraska. She resided in Franklin County, while serving as a nurse at Franklin County Memorial Hospital for 45 years as a Registered Nurse, and later as the Director of Nursing.

She married Mervin Fritson on January 15, 1955, at Zion Lutheran Church in Upland, Nebraska. Five children were born to their marriage - Nancy, Diana, Randall, Steven and Ronald. Mervin preceded her in death on May 25, 2001. She was also preceded in death by her infant daughter - Nancy; Dad - Rudolph Bartels: and brother - Neil Bartels.

While working as a full-time nurse, she assisted on the farm and cared for her children. Ardyce served at Zion American Lutheran Church in various capacities, always making her faith, family, and community a priority in her life.

Upon her retirement she continued to serve the community volunteering with specialty clinics, the Blood Mobile, Mobile Imaging Unit, Relay for Life, and the Franklin County Memorial Hospital Auxiliary. Near and dear to Ardyce were reading, attending her grandchildren's activities, women's weekly card club with her closest friends, and maintaining her flower garden. She was a loving, kind, and gentle mother to her children, grandchildren, and great-grandchildren. Family and God meant the world to her always making it a point to make them first. Until her passing, Ardyce cherished her mother Esther Bartels, who continues to reside in Franklin.

Ardyce died Monday, February 6, 2017, at the Franklin Care and Rehabilitation Center, in Franklin, Nebraska, at the age of 82 years, 7 months, and 25 days.

To order memorial trees or send flowers to the family in memory of Ardyce Fritson, please visit our flower store.