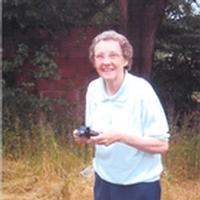 Longtime Franklin resident Ardith Johanna (McClure) Jones, 89, passed away November 1, 2017 in the comfort of her own home just outside of Franklin, Nebraska.

Ardith and her twin brother Aubrey were born in rural Smith County, Kansas on July 1, 1928 to Olen and Tena (Smith) McClure. Upon her graduation from Athol High School in 1946, Ardith attended classes at Fort Hays where she received her teaching certificate. She taught in one room schools in the Athol area until her marriage to John "Jay" Jones on June 11, 1955. Six children were born to this union; Glenda, Glenn, Carol, Cindy, Allen and Arlyn.

In September 1960, Ardith and Jay moved from the Athol area to their farm two miles northwest of Franklin where she and Jay lived and farmed for the rest of their lives. Jay also was the County Judge of Franklin County from 1965 until his retirement in 1985.

A celebration of life service for Ardith J. Jones was held, Tuesday, November 7, 2017, at 2:00 p.m. at the First United Methodist Church, Franklin, Nebraska, with Pastor Phil Sloat officiating. Mrs. Connie Kahrs, was the organist, and the congregation sang three hymns - "Victory in Jesus", "Hymn of Promise", and "Precious Lord, Take My Hand". Casket bearers were - Glenn Jones, Allen Jones, Arlyn Jones, Robert Shepard, Scott Harrick, and Layton Harrick. Interment was in the Greenwood Cemetery, Franklin, Nebraska, Next to her late husband, John. Visitation was at the Hutchins Funeral Home, Franklin, Nebraska, from 1 p.m. to 7 p.m., Monday, November 06, 2017. The family suggests memorials in honor of Ardith be given to the funeral home, and a charity will be named at a later date. Online condolences can be left at www.hutchinsfh.com. Hutchins Funeral Home, Franklin, Nebraska, was in charge of arrangements.

To order memorial trees or send flowers to the family in memory of Ardith Jones, please visit our flower store.